You are at:Home»Currency-Hedged»Value to be Had With Asia ETFs 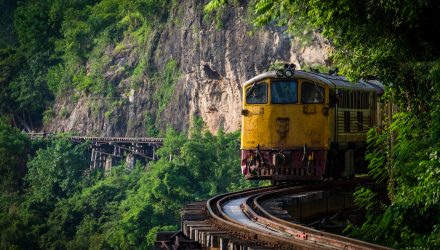 Value to be Had With Asia ETFs

“As of the end of July, Japanese equities remain the cheapest equity market in the developed world.  The Topix Index (TPX) is trading at 1.8 times price-to-book (P/B), roughly half the level of the S&P 500. The current discount is close to the lowest since 2012, a period that preceded a three-year, 150% rally,” said BlackRock in a recent note.

Last month, there was rising speculation that the BOJ was debating moves to scale back its massive monetary stimulus policy, Reuters reports. Officials were holding preliminary discussions on possible changes, which include adjustments to interest rate targets and stock-buying techniques, along with ways to make its stimulus program more sustainable.

EWJ’s currency hedged equivalent is the iShares Currency Hedged MSCI Japan ETF (NYSEArca: HEWJ). Meanwhile, hedge funders and institutional investors are beginning to look at Japan as a cheap play after the recent selling. Bullish traders argue that valuations in Japan are more attractive than in the U.S. as corporate profits improve, Bloomberg reports.

“Japan has witnessed a significant improvement in both corporate governance and profitability. The return-on-equity (ROE) for the TPX now stands at 11.1%, close to a multi-decade high and more than twice the level of six years ago. Japan’s low valuation seems even harder to justify given this improvement in corporate profitability and still ultra-accommodative monetary conditions,” according to BlackRock.

The U.S. dollar is expected to strengthen against its foreign counterparts as the Fed normalizes interest rates ahead of its developed market peers and the U.S. economic growth exhibits upside potential, bolstering the case for ETFs such as HEWJ that hedge international currency risk.

“Rather than fundamentals, today’s Asia discount can likely be attributed to three trends: stellar U.S. earnings growth, a stronger dollar as a headwind for EM stocks and rising trade frictions,” said BlackRock.