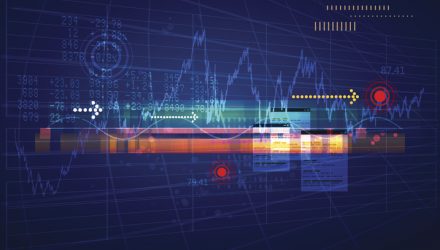 U.S. markets and stock ETFs were slipping mid-Monday as traders waited on a closely monitored meeting between the U.S. and China at the G20 summit later this week.

While optimism over renewed trade talks between the two largest economies at the G20 summit and hopes the Federal Reserve would cut interest rates to counteract the negative impact of a trade war on growth helped lift U.S. markets to record highs last week, investors took a more wait a see approach on Monday, with markets meandering within range.

“Since the trade war began more than 12 months ago, economically-sensitive parts of the global equity markets have underperformed,” Brian Koble, chief investment officer at Hefren-Tillotson, a wealth management company, told Reuters. “Investors could be well-rewarded should there be progress toward a trade deal.”

The equity market has been rallying in recent weeks and the S&P 500 was on pace for its best June performance in decades. However, many remain cautious warning that any signs of faltering trade talks between Beijing and Washington could trigger another round of volatility, the Wall Street Journal reports.

“Everything else is probably secondary” to the trade talks, Art Hogan, chief market strategist at National Holdings, told the WSJ. “If you can get in and get out of the G-20 without things breaking down, that’s probably the most important thing for the markets.”

UBS analysts warned that an escalation of the U.S.-China trade conflict could drag global stocks down by 20% by the middle of next year while 10-year Treasury yields could fall all the way down to 1.3%.

“The simple message is that market prices see the trade war talk largely as posturing,” the analysts said.