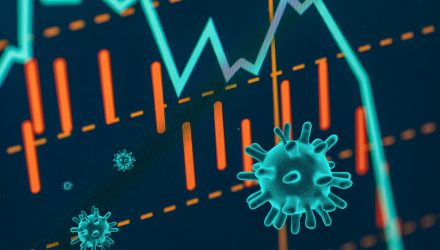 U.S. markets and stock ETFs surge on signs that the quarantine efforts are beginning to slow down the spread of the coronavirus pandemic.

Market watchers are expecting the U.S. to finally cross a difficult hurdle this week, with infections likely to peak.

New York, the hardest-hit U.S. state by the coronavirus, on Sunday revealed its first decline in deaths per day, but Governor Andrew Cuomo sounded a word of caution on the significance of that number. Meanwhile, health authorities have warned that new projections show the number of cases is likely to hit a new high in the days ahead.

“Seeing signs of stabilization in New York City is probably the most important thing given the amount of capital that’s controlled through managers that live in the area,” Thomas Hayes, managing member at Great Hill Capital LLC, told Reuters. “It’s a tremendous relief for the market (but it’s) not to say that we’re through the woods yet because we’re going to have a tough week or two ahead.”

Furthermore, containment measures and calls for people to seek shelter at home have shown signs of slowing the spread of the contagion in parts of Europe, including Italy and Spain., which were among the hardest hit in the region. Both countries are now seeing the fewest daily deaths in over a week.

“A sense of eagerness to see a turn in the spread of the virus and economic growth is driving the market,” Govinda Finn, an economist at Aberdeen Standard Investments, told the WSJ. However, “I wouldn’t have massive confidence that we are there yet, so I think the rally probably won’t last long.”