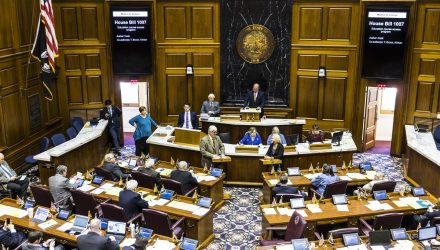 After broad consolidation over the past two weeks, U.S. markets have been reeling from a variety of news announcement Tuesday, including increasing pressure to impeach President Donald Trump.

House Speaker Nancy Pelosi on Tuesday announced she was moving forward with a formal impeachment inquiry.

“The actions of the Trump presidency revealed the dishonorable fact of the president’s betrayal of his oath of office, betrayal of our national security, and betrayal of the integrity of our elections,” Pelosi said. “Therefore, today I’m announcing the House of Representatives is moving forward with an official impeachment inquiry.”

Former Vice President Joe Biden’s campaign said Tuesday he backs impeachment of President Trump if the White House refuses to comply with congressional demands for information about his interactions with Ukraine’s president.

Biden’s campaign said the candidate will demand that Trump acquiesce to all of Congress’s current lawful requests for information on Ukraine and other investigations. Otherwise Biden will state Congress has no choice but to impeach.
The remarks will Biden’s first extended comments about Trump’s interactions with Ukrainian President Volodymyr Zelenskiy when Trump pressured Zelenskiy to investigate the business activities of Biden’s son Hunter, a director of Burisma Holdings, a Ukrainian energy company.
Trump’s insistence that a foreign leader investigate a domestic political rival “appears to be an overwhelming abuse of power,” Biden said this weekend in Des Moines, Iowa.

“After the Mueller report, Congress had a duty to begin impeachment,” Ms. Warren tweeted on Friday. “By failing to act, Congress is complicit in Trump’s latest attempt to solicit foreign interference to aid him in US elections. Do your constitutional duty and impeach the president.”

The formerly tepid mood among Democrats in Congress has shifted significantly this week with more lawmakers announcing they are in favor of initiating impeachment proceedings. Pelosi said she will address the issue later Tuesday.

Democratic Representative John Lewis, who has also been hesitant to call for impeachment, said the Ukraine developments gave him a change of heart.

“I truly believe the time to begin impeachment proceedings against this president has come,” Lewis said Tuesday.