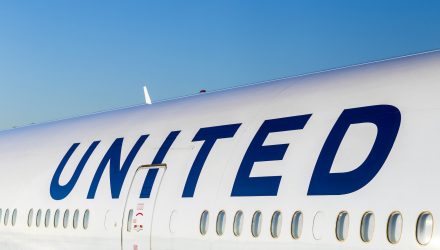 Travel and leisure stocks are struggling on Wednesday, hampering an airline ETF, in the wake of persistent fears that the coronavirus will obstruct any progress that may have been made from the economic reopening of the U.S.

United Airlines on Wednesday said it is admonishing approximately 36,000 front-line employees, or over 30% of its workers, that potential furloughs could result as Covid-19 continues to hamper demand for flights and travel.

The potential for the mass job cuts is the most significant tally announced by a U.S. airline so far and arrives as there are ongoing indications that the leisure sector will struggle due to new coronavirus infections and travel restrictions.

Federal law says that employers must provide employees with notice about potential layoffs or temporary furloughs at least 2 months in advance. United and other airlines that took $25 billion in federal payroll support are prohibited from laying off, furloughing, or cutting the pay rates of staff until Oct. 1.

In a memo sent to employees Wednesday, United said workers who receive a WARN notice may not get furloughed, and that the airline will attempt to utilize all voluntary measures before slashing staff. Some industry executives say it could take years for demand to fully return to capacity.

“The reality is that United simply cannot continue at our current payroll level past October 1 in an environment where travel demand is so depressed,” the carrier said in its staff note. “And involuntary furloughs come as a last resort, after months of company-wide cost-cutting and capital-raising.”

United shares sank 3.6% after the announcement, dragging some other airline names down as well. Travel and leisure stocks that would be rewarded from the economy reopening were already under pressure, with Delta and American Airlines slipping 2% and 1.8%, respectively. The U.S. Global Jets ETF (JETS) is down almost 2% amid the news.

“The United Airlines projected furlough numbers are a gut punch, but they are also the most honest assessment we’ve seen on the state of the industry,” said Sara Nelson, a flight attendant for the airline and president of the Association of Flight Attendants.

United, Delta, American, and other airlines have been urging workers to accept premature retirements, buyouts and other voluntary measures as the carriers scramble to curtail costs. With waning travel demand as the normally busy summer season kicks in, there is a bleak outlook for the industry, and voluntary measures may not be enough to contain airlines’ costs to regulate weak demand.

In early May, the “Oracle of Omaha” revealed that he recently dumped his entire stake in the big four U.S. airlines—Delta, American, United, and Southwest. As of the end of December, the position collectively stood at around $10 billion. Buffett’s decision to exit airlines seems to have stemmed directly from the coronavirus lockdown and its impact on the travel industry. In other words, it had nothing to do with how the carriers were being managed.

United is not the only airline to suffer problems. American Airlines last week prompted employees that it anticipates being overstaffed by 20,000 people for its diminished fall schedule.

The airline told employees on Wednesday that “it’s increasingly likely that travel demand will not return to normal until there is a widely available treatment or vaccine.”