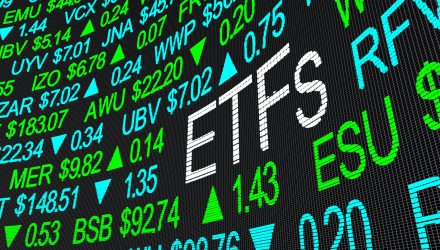 While individuals around the world struggle to remain sane and solvent under shelter-in-place orders resulting from the coronavirus pandemic, stocks and certain commodities made a comeback in April, and ETF investors were along for the ride according to inflows data.

Inflows for U.S.-listed ETFs were noteworthy in March, as a net $176 million moved into the space, despite stock markets plummeting by an amount not seen since 2008. The inflows imply that investors were reluctant to sell their assets despite massive volatility in markets and abysmal economic headlines.

While surprising, that faith and resiliency continued into April, where stocks rallied hard from their lows, giving the S&P 500 its largest monthly gain since 1987, and investors a signal that it was time to dog pile into ETFs. As a result, in total, $48.8 billion flowed into U.S.-listed ETFs during the month, pushing year-to-date inflows up to $121.1 billion, ahead of the $79.7 billion seen at the end of last April.

There were a number of asset classes to benefit from the inflows, including U.S. equity ETFs, which gathered $16.4 billion of fresh cash during April, while U.S. fixed income ETFs garnered $20.3 billion. Treasury yields dropped to near record-lows during April, as the Fed implemented an asset purchase program to buy hundreds of billions of dollars worth of government debt (bond yields and prices move inversely). The Federal Reserve increased effort in credit markets by offering to buy recently downgraded junk bonds and junk bond ETFs, which spurred the iShares iBoxx USD High Yield Corporate Bond ETF (HYG) become one of the biggest flows winners of April.

Other major winners in the ETF asset gathering race in April, included stock index funds and commodities ETFs. The Vanguard S&P 500 ETF (VOO), the Vanguard Total Stock Market ETF (VTI), and the Invesco QQQ Trust (QQQ) were three major recipients of new assets, as investors sought to establish positions in the broad-based stock market run-up that began in at the end of March, and gained momentum in April.

In the commodities spaces, crude oil and gold staged dramatic moves as volatility ramped up, with oil plummeting to negative territory and unseen lows, while gold rallied to highs not witnessed in nearly a decade. The United States Oil Fund (USO) experienced unprecedented drama, while the SPDR Gold Trust (GLD) has continued to be a favorite among ETF investors.