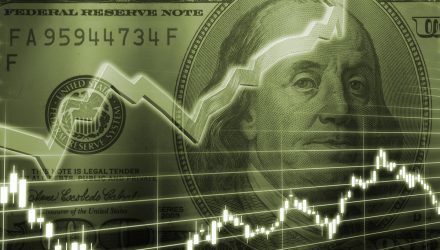 The U.S. dollar, one of 2018’s best-performing major currencies, could weaken next year, bringing much anticipated relief for several asset classes along the way.

The Invesco DB U.S. Dollar Index Bullish Fund (NYSEArca: UUP), which tracks the USD’s movements against a basket of major developed currencies, is up nearly 7% year-to-date. Analysts argued that the dollar’s strength at the start of the year was just a brief spike in a broader downward trend that began in 2017, pointing to easing of trade tensions, the ebbing effects of U.S. tax cuts and the Fed’s hesitation to tighten its monetary policy.

However, the dollar has been persistently strong in 2018, sapping asset classes such as commodities and emerging markets debt, among others. That trend could end in 2019.

“The greenback will fall around 2 percent against the Group-of-10 peers over six to 12 months after climbing 1 percent in the next three months,” according to Citigroup, reports Bloomberg. “Absolute growth and relative cyclical outperformance in the U.S. will slow and the yield advantage enjoyed by the dollar will be less sustainable, they said.”

What’s Next for U.S. Dollar?

UUP is sitting on a fourth-quarter gain of 1.30% and resides 4.04% above its 200-day moving average. The dollar could get a near-term boost from a December interest rate hike by the Federal Reserve, a move that is widely expected to happen.

“The U.S. currency has rallied against all G-10 peers this year, buoyed by three Federal Reserve rate hikes while robust corporate earnings sent major benchmark stock indexes to record highs,” according to Bloomberg.