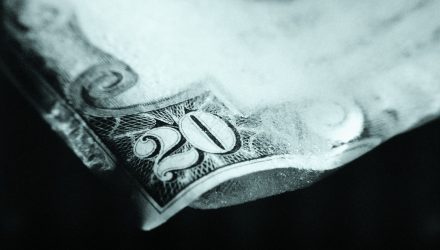 Is U.S. Dollar Disappointment in Store for 2018?

Underscoring the dollar’s weakness, the PowerShares DB U.S. Dollar Index Bullish Fund (NYSEArca: UUP), the exchange traded fund proxy for the U.S. Dollar Index (DXY), fell more than 9% in 2017 and stumbled into the end of the year with a December loss of about 1%.

UUP tracks movements against a basket of currencies including euro, Japanese yen, British pound, Canadian dollar, Swedish krona and Swiss franc. The U.S. dollar is strengthening on a number of factors. For instance, the U.S. index of business conditions rose to a three-year high, adding to the improving U.S. economic outlook.

After its worst performance in 14 years, it would make sense that the beaten-down dollar should rebound next year, especially with the Fed raising interest rates and an oncoming gusher of fiscal stimulus from tax cuts,” reports CNBC. “But some strategists instead see the dollar continuing its decline, which started in the early days of 2017, as it competes with other currencies in a period of synchronized global growth.”