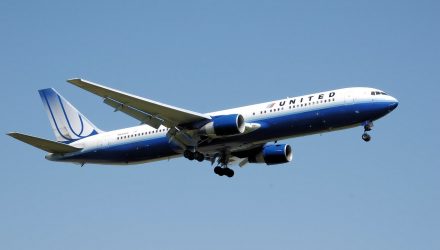 The U.S. Global Jets ETF (NYSEArca: JETS), the only available pure-play fund that focuses on the global aviation industry, rose 1.1% Monday and gained 4.9% over the past month, trading back above its long-term trend line at the 200-day simple moving average after breaking out back in August.

Lifting the airline sector, United Airlines, the third-largest U.S. airline, has pushed through the rash of public relations problems and investors who were concerned that the carrier’s growth plan would trigger a fare war with competitors, CNBC reports.

UAL is the largest component in JETS underlying portfolio, making up 13.8% of the fund’s holdings.

United shares have made a drastic turnaround, rising over 33% this year, even after falling off 11% in January and struggling through the second tense earnings call in a row.

“They were in the doghouse from the market’s perspective,” Jamie Baker, senior airline analyst at J.P. Morgan Chase, told CNBC.