You are at:Home»Equity ETFs»U.K. ETFs Up Despite Resignations of Key Brexit Officials 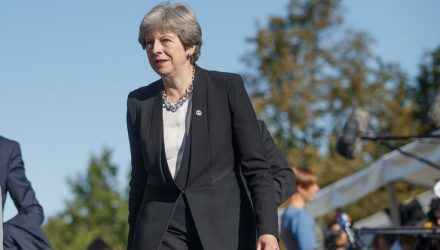 U.K. ETFs Up Despite Resignations of Key Brexit Officials

Britain’s national soccer team is finding their groove with their entry into the semifinals of the World Cup, but the state of their government paints a paradoxical picture as key members leading Britain’s efforts to cut ties with the European Union resigned on Monday.

David Davis resigning at such a crucial time shows @Theresa_May has no authority left and is incapable of delivering Brexit.

With her Government in chaos, if she clings on, it’s clear she’s more interested in hanging on for her own sake than serving the people of our country.

The resignations of Davis and Johnson swing the initial Brexit plans towards a “no deal” that leaves questions as to who may leave next. The markets responded with the British pound dropping sharply against the dollar following the resignation news.

U.K. ETFs Respond in the Green