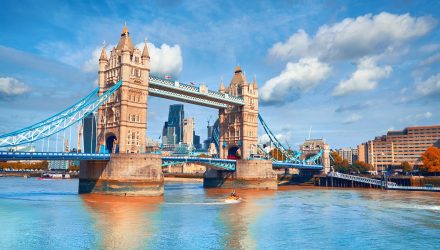 While the U.K. continues wrangling with various elements of Brexit, the country’s departure from the European Union (EU), U.K. stocks and the related exchange traded funds are soaring. The iShares MSCI United Kingdom ETF (NYSEArca: EWU), the largest U.K.-related ETF, is higher by nearly 14.50% this year.

After taking out the currency swings associated with the weaker British pound sterling currency, U.K. stocks reveal a long-term under-performance. In U.S. dollar terms, the FTSE 350 benchmark is trading around the same level it did at the start of 2016.

With its gain of 5.66% just this month, EWU recently took out its 200-day moving average and some market observers like the technical conditions for the benchmark U.K. ETF.

“By Friday’s close, EWU had not only ramped above its 200-day moving average for the first time since June 18, but it did so for three consecutive sessions to end the week. The strong weekly finish above this benchmark trendline follows a late-February breakout by EWU above its 160-day moving average, which was quickly confirmed by a successful retest of this level as support earlier this month,” according to Schaeffer’s Investment Research.

Another Idea for U.K. investing exposure