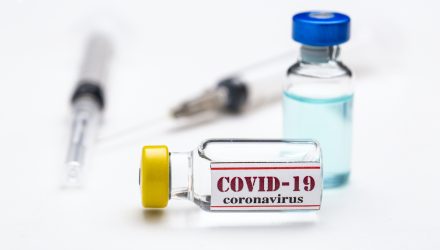 Both stock index ETFs and biotech stocks and ETFs have been on a tear lately thanks to promising coronavirus vaccine developments from several major pharmaceutical companies. But this week, the U.K. became the first country to authorize Pfizer’s coronavirus vaccine for emergency use, which is likely to increase pressure on the U.S. Food and Drug Administration to follow suit.

One of the issues with the delay for the U.S. is the way the vaccine is analyzed. Pfizer had been entering data on its vaccine with BioNtech on a “rolling basis” to the U.K., which permitted regulators to examine the data in real time until there was sufficient evidence to issue a formal authorization.

Meanwhile, in the U.S., the FDA will go through every minute detail of the data submitted in the application, including reviewing all safety information “to make sure there are no cracks” and everything is “solid,” said Dr. Paul Offit, a voting member of the Vaccines and Related Biological Products Advisory Committee, which is scheduled to review Pfizer’s vaccine on Dec. 10.

“I don’t know what data the U.K. was working with. I know when data is submitted to the FDA, it’s voluminous,” said Offit, also director of the Vaccine Education Center at Children’s Hospital of Philadelphia. “When you talk about a 44,000-person trial, that’s a lot of clinical data.”

To give some idea of the magnitude of such an undertaking, Offit said when Merck submitted its data from its 70,000-person rotavirus vaccine trial, the pages that were created could have formed a hill that eclipsed the Sears Tower. “The point being: It’s a lot of data,” Offit said.

Pfizer submitted its coronavirus vaccine data to the FDA on Nov. 20. The agency’s review of the vaccine is expected to take a few weeks, but public health officials anticipate that the first doses of the vaccine could be distributed in as little as two weeks.

Fauci Cautious Over the Approval Process

Dr. Anthony Fauci criticized the U.K.’s authorization of Pfizer’s Covid-19 vaccine, saying the examination was performed in a “much less deep” manner than the U.S. Food and Drug Administration would undertake.

“The U.K. has decided to do it a little bit differently, they’ve gone over it very quickly,” he told Sky News in a video published Thursday. “And I can say, and this is not a criticism, but they’ve done it in a way that is much less deep than has been done and is being done by the FDA in the United States.”

Fauci claimed the FDA is “hurrying it up a bit” but “not nearly as quickly as you did in the U.K.”

“If we did that in the United States, it would have been to our disadvantage because it would have generated a lot of skepticism about the speed at which it was approved,” he said. “We don’t look upon it as a race, who won the race. The product is there. The trial was done. The data look really good,” he added.

“We have the gold standard of a regulatory approach with the FDA. The U.K. did not do it as carefully and they got a couple of days ahead,” he said. “I don’t think that makes much difference. We’ll be there. We’ll be there very soon.”