You are at:Home»Equity ETFs»Turkey ETF Plunges in Response to Erdogan’s Iron Grip on Economy 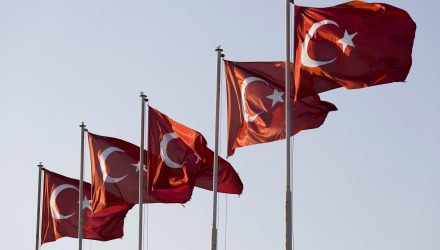 The iShares MSCI Turkey ETF (NASDAQ: TUR) declined 3.1% Tuesday after falling off 3.3% Monday, which have more or less erased the gains accumulated since mid-June.

Dragging on the Turkish markets, the lira currency weakened 4% against the U.S. dollar late Monday after Erdogan appointed his son-in-law as finance minister and placed measures that could diminish the independence of the central bank, the Wall street Journal reports.

“There’s a real risk that this spirals into a full-blown currency crisis,” Paul McNamara, a portfolio manager at GAM Holding, told the WSJ. “It’s got so many red flags that we’ve associated with economic crises…in the past.”

The lira has already lost a fifth of its value against the greenback this year as investors dumped the currency ahead of Erdogan’s June re-election on concerns the president would erode the central bank’s powers and push for looser monetary and fiscal policies. Erdogan has already stated that high interest rates are “the mother and father of all evils,” fueling fears that his desire for lower rates could further deteriorate the currency and elevate inflationary pressures.