You are at:Home»Equity ETFs»Turkey ETF Plummets on Mounting Lira Concerns 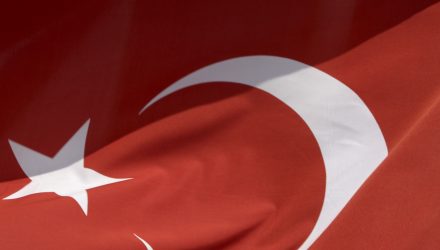 “This is chump change and the fact that this is all they can do while the lira is in free-fall is quite disappointing,” Win Thin, a strategist at Brown Brothers Harriman, told Bloomberg.

The country’s lira currency has weakened about 28% against the U.S. dollar so far this year. The weakness in the lira has in turn diminished the ability of companies to repay foreign currency-denominated debt, fueled inflation and pressured the central bank to hike rates, which would further hamper growth.

Commerzbank analyst Lutz Karpowitz warned that Turkey’s central bank move to adjust the reserve options mechanism will only lead to more currency weakness and its reluctance in hiking rates is seen as a dovish signal, which will likely further weaken the lira.

On Friday, the government will release data over the current account balance. The deficit has been widening, and economists warned this could make the country increasingly vulnerable to external shocks, the Financial Times reports.

“We continue to focus on the financing of the deficit as a key area of risk,” Goldman Sachs economists said in a preview of the report.