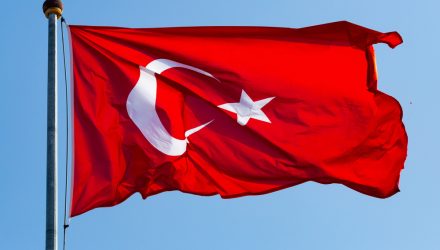 A Turkey country-specific exchange traded fund continued to gain Monday after the Central Bank of the Republic of Türkiye enacted a surprise rate cut to bolster the economy, despite inflation surging to 80%.

The iShares MSCI Turkey ETF (NasdaqGM: TUR) increased 1.5% on Monday and increased 15.6% over the past month.

Last week, Turkey’s central bank shocked markets by cutting its main policy rate to 13% from 14%, diverging from the tightening monetary policies of other global central banks, even as headline inflation rates climbed 80%.

“It is important that financial conditions remain supportive to preserve the growth momentum in industrial production,” Turkey’s central bank said Thursday in a statement following its decision.

President Recep Tayyip Erdogan has been advocating a rather unorthodox monetary policy that advocates lower interest rates to strengthen the domestic economy, even in the face of rising inflationary pressures.

“What Turkey needs is not a rate hike but an increase in investment, employment, production, exports, and current account surplus,” Erdogan said in Ankara on Monday, speaking after chairing a cabinet meeting, adding that Turkey will set its economic policy based on its own interests and needs, according to Bloomberg.

“Economics theories aren’t valid everywhere, unlike physics or mathematics,” Erdogan said. “These theories vary according to the conditions and strength of a country.”

Turkish officials have burned through its foreign currency reserves, and the latest summer tourist season helped put more funds back into the reserves. Some banking analysts suspect that Turkey received additional funding from Russia.

Additionally, as a way to help support a falling lira currency, Ankara has been supporting a state-backed deposit plan to raise savings. Turkey also scrounged together additional foreign funds to sustain its deposit scheme on Monday, Reuters reported. According to banking data, the lira-protection plan went smoothly in July and August with $30 billion in deposits passed through without issue.