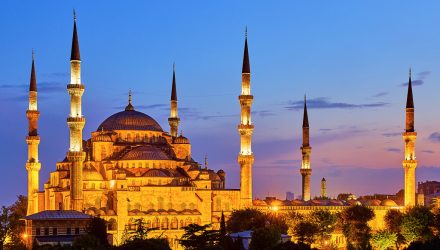 “There are only three options to halt the freefall of the Turkish lira,” tweeted Dani Rodrik, an economist at Harvard University. “1. Sell dollars at the expense of using up the central bank’s reserves. 2. Announce a serious rate hike. 3. Capital controls. Choose your poison.”

In addition to bonds to rising yields on Turkish bonds, the lira has been hitting all-time lows against the U.S. dollar. In an effort to prop up the currency, the Turkish central bank lowered the reserve requirement for banks by 250 basis points to improve liquidity conditions.

Adding more fuel to the flame was U.S. President Donald Trump announcing that he would double tariffs on steel and aluminum, which further hampered the Turkish lira. President Erdogan went as far as asking citizens to convert their dollars and other foreign currencies, including safe-haven assets like gold to Turkish lira.

Related: Kevin O’Leary: Turkey is a ‘Nothing Burger’