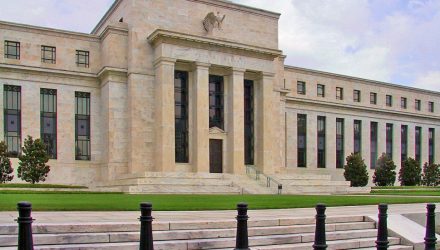 Trump ‘Not Happy’ About Rates, Floating Rate Investors Are

In typical Trump fashion, the president voiced his displeasure via Twitter, saying that the U.S. “should not be penalized because we are doing so well.”

President Trump’s comments also stem from concern that a rising dollar in conjunction with rising rates will discourage investment from abroad.  Looking at the U.S. Dollar Index Chart, the greenback has been gaining strength, particularly within the past few months where it has ticked above its 50-day simple moving average.

Furthermore, he expressed his concern to CNBC that rising rates will be the steroidal injection that causes the dollar to gain so much strength, placing the U.S. at a “disadvantage” when other central banks like Europe and Japan are keeping rates low.

While rising rates may not conjure up thoughts of excitement for President Trump, fixed-income investors allocating their capital into ETFs that feature a floating rate component are rejoicing. With every short-term rate adjustment that the Federal Reserve decides to incorporate, the yields on debt issues that feature a floating rate effectively hedge against these rate spikes.