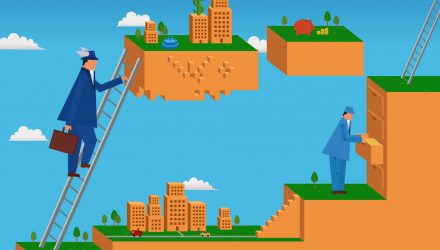 As has been widely documented, the Financial Select Sector SPDR (NYSEArca: XLF), the largest financial services exchange traded fund, and rival ETFs tracking the sector have been struggling. June 27th marked the thirteenth consecutive day in which the S&P 500 Financials Index finished lower, marking the benchmark’s longest ever losing streak.

Not surprisingly, the length of XLF’s losing streak opened the door for significant technical weakness, which sees the fund residing below its key moving averages.

“The XLF drop below its 200-day was the latest stumble in an ongoing downtrend from the fund’s late-January peak just north of $30, as the shares have formed a series of lower highs since then,” reports Schaeffer’s Investment Research. “However, the $26.50-$27 neighborhood has reliably contained XLF’s lows in 2018. The resulting descending triangle pattern most often has bearish implications, suggesting a reversal of the longer-term XLF uptrend is taking shape.”

XLF and some rival bank ETFs have recently suffered outflows. Data from the options market indicate professional traders have not been buying many protective puts on XLF, perhaps saying professionals are whittling or eliminating long positions in the fund.