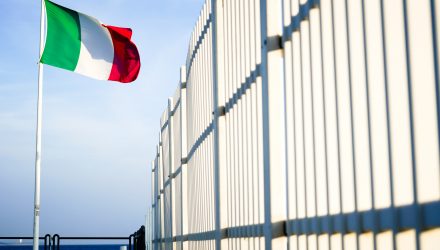 Italian stocks are among Europe’s worst performers this year. The iShares MSCI Italy Capped ETF (NYSEArca: EWI), the largest US-listed exchange traded fund dedicated to Italian equities, is lower by nearly 17%, making it one of the worst-performing single-country ETFs tracking a developed economy and challenges are mounting, not abating, for Italy’s economy.

Various data points indicate the Eurzone’s third-largest economy behind Germany and France is entering a recession. Increased uncertainty regarding government efforts to enhance Italy’s fiscal status is weighing on the minds of some investors.

“The Italian stress scenario assumes that the Lega and the Five Star Movement coalition government presents expansive budgets for both 2019 and 2020, which rattles bond markets and rating agencies, leading to acute financial market turbulence,” said Markit in a recent note. “This uncertainty triggers a change in government during 2020, which begins to repair the damaged fiscal accounts at a time when Italy is in moderate recession.”

“The stress scenario assumes that the new coalition government lasts at least two years, and includes the 2019 budget parameters and presumes another expansive fiscal plan for 2020,” according to Markit. “This contrasts to our current baseline, which assumes that the government folds in late-2019 as a result of increasing financial market stress after trying to flout European Commission budgetary rules for a second time in late-2019.”