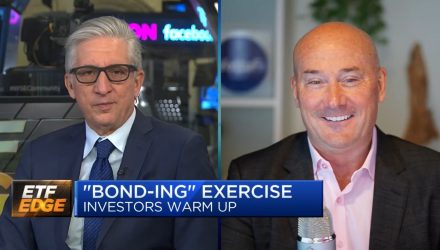 Tricks or Treats With Tom Lydon: See What Shocked These Industry Pros

Tricks or Treats abound in the market, so to cut through the scary market vibes, VettaFi vice chairman Tom Lydon was on Bob Pisani’s ETF Edge along with JP Morgan global head of ETF solutions, Bryon Lake, who runs the largest actively managed ETF in the world, the JPMorgan Ultra-Short Income ETF (JPST).

“The rising rate environment has been the story of the year,” Lake said, noting that investors are seeking more tools. JPST has a yield of 3.2%, one of the many considerations fueling its widespread popularity. The fund invests in short-term fixed and floating-rate corporate and structured debt, making it an attractive place for investors to park while the market regains its footing. “Some people use it as a long term strategic; some people use it to take some risk out of their portfolio,” Lake said.

Asked by Pisani what he thought about investors becoming more comfortable with “cash-like” ETFs, Lydon said, “Short duration, Money Market, CDs, were basically dead money up until about a year ago. One of the good things about Feds hiking rates is short duration or money market funds are actually paying something now.” Lydon pointed to the flat volatility levels in JPST. “If you kept your powder dry and you are looking for areas where you can make some money these days, it’s a great opportunity,” Lydon continued.

The Fed’s clarity around interest rates has helped further buoy the case for shorter-duration bonds, according to Lydon, but as Pisani pointed out, JP Morgan also has a core plus product that mixes a variety of bonds. Lake said, “When you look at a passive fixed income benchmark, it’s not exactly how investors think about investing in bonds. They want it to be a ballast, they want it to be something that gives them yield, they want something that has a low correlation to equities.” Looking at the JPMorgan Core Plus Bond ETF (JCPB), Lake noted that it owns everything that can be a portfolio ballast but has the flexibility to use multiple approaches.

Despite its spooky history, active management has found its moment in this highly volatile market. “The pendulum has swung, Bob,” Lydon said, observing how active managers have managed to find their groove.

Lake concurred, touting JCPB’s portfolio manager for their ability to be intentional about which bonds they are owning. “They are actively managing that portfolio to do what it’s intended to do,” he said. While passive funds are dictated entirely by what the index does, Lake sees utility in being able to float all over the place.

Another mixed fund, the JPMorgan Equity Premium ETF (JEPI), boasts a dividend yield of 12.5%, exposure to large-cap U.S. stocks, and lower volatility. “The premium that comes from those options is dictated by the volatility of the markets,” Lake explained.

Lydon noted that the markets have come back somewhat and paved the way for quality companies with clean, balanced sheets to perform. He told Pisani, “now that we’ve taken our medicine on the fixed income side, we’re also in a situation where we can get some decent yields.”

If volatility comes down, JEPI will collect less premium, and that yield will drop. Lake sees the options as providing downside protection, noting that while benchmarks have created 25-30%, JEPI is only down 7%.

RIA’s Reveal Their Fears to VettaFi

By far the scariest ghoul lurking on the landscape for advisors in inflation, according to Lydon. It’s been an ongoing two-year narrative, and bonds are both down double digits. “The good news is we’ve got valuations in stocks,” Lydon noted. He sees generational buying opportunities, most notably in emerging markets. Lydon also said, “yields are back,” but he sees inflation as still haunting the landscape.

Rounding Out the Conversation

To round out the conversation, Pisani spoke to Lydon for the podcast portion of the show to further dig into income and “equity plus.” Pisani wondered if strategies to protect the downside like JEPI’s will continue working in 2023.

“I think its going to continue to work, the demand has surely been there,” Lydon said, noting that high inflation brought rising interest rates, which devastated fixed income. “What we saw with not just financial advisors managing money, but self-directed investors who had retirement portfolios — they were shifting away from fixed income while yields were dismal anyway and looking for alternative strategies,” he noted.

Sharing something he noted in his book, Pisani reflected on how unusual it was to have years where stocks are down 20%. “There’s only 15 times since the 1920s this has happened,” he said, cautioning that, “half the time you’re made whole within a year.”

Lydon agreed that stocks tend to rebound from bad years and said to Pisani, “To your point, don’t get emotional — don’t drive your portfolio allocation based on how you feel in your stomach.” He spoke further about conviction, speaking to how investors can look at Cathie Wood as someone who doubles down on her convictions even in the hardest times.

Looking to how the ETF business could close out this year, Lydon observed, “We’re looking to have maybe the second-biggest year of inflows in ETFs.” In a year where both fixed income and equities have been dinged, this is a pretty exceptional accomplishment. More mutual fund to ETF conversions are likely, according to Lydon, even though some mutual fund members might be coming in kicking and screaming.