You are at:Home»Fixed-Income»Treasury ETFs Still Have a Place in a Diversified Portfolio 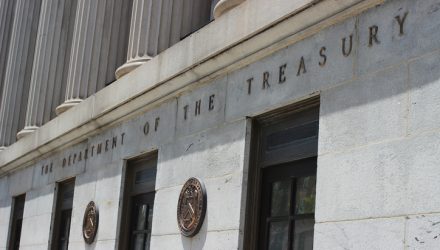 Treasury ETFs Still Have a Place in a Diversified Portfolio

Given the sudden spike in volatility, investors should not overlook the benefits of a stable government bond exchange traded fund in a diversified bond portfolio.

“We advocate a strategic allocation to government bonds, despite their low potential returns, as a buffer against equity market sell-offs,” BlackRock strategists, led by Richard Turnill, Global Chief Investment Strategist, said in a research note.

Government debt have traditionally provided a buffer against market turns as bond prices would often go up when stock prices fall off and vice versa, offering a negative correlation on average.

“Our analysis shows government bond have provided positive returns during periods of significant equity declines, upholding their diversifying role,” according to BlackRock. “Of the 22 months since 2010 that featured negative U.S. equity returns, bonds notched positive returns in each month in which equities fell 2.5% or more. The one exception: during the taper tantrum.”

While the prospects of higher interest rates out of the Federal Reserve have dampened demand for government debt securities, rates have actually reversed this year from their post-U.S. election highs.