You are at:Home»Featured»Treasury ETFs Scramble Back after FOMC Thrashing Wednesday 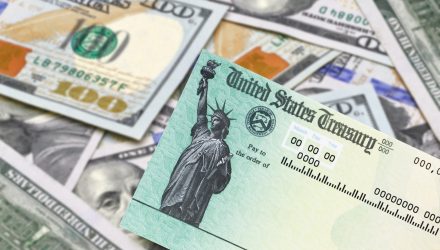 Treasury bonds and the ETFs that track them are surging back towards recent highs, after tumbling Wednesday, amid comments from the Federal Reserve that it is increasing its expectations for inflation this year and moving up the timeline on when it will next raise interest rates.

While the central bank mentioned it will look to increase rates sometime in the future, it gave no indication as to when it will begin curbing its zealous bond-buying program, something that Fed Chairman Jerome Powell did confess was discussed by officials at the meeting.

Powell attempted to downplay the severity of the looming policy changes, something that didn’t prevent bonds and stocks from a volatile reaction.

As expected, the policymaking Federal Open Market Committee unanimously retained its benchmark short-term borrowing rate tethered near zero. But officials suggested that rate hikes could arrive as soon as 2023, changing the tone from March, where it foresaw no increases until at least 2024.

“Mortgage rates were already drifting higher in the first half of the week, but that was nothing compared to today.  This afternoon’s Fed Announcement was certainly on the radar as a potential source of volatility. Needless to say, it delivered,” wrote Mathew Graham of mortgagenewsdaily.com.

“On a somewhat similar note, there’s another misconception about changes in the Fed Funds Rate correlating with mortgage rate movement.  While that can be true over long time horizons, we don’t need to look too hard to find examples to the contrary.  I’ll submit today as a great example.  The Fed kept its policy rate unchanged and further said they weren’t even close to considering a rate hike.  Nonetheless, the average mortgage lender jumped by about an eighth of a percent in 30yr fixed terms (that’s a very big move for a single day),” Graham wrote.

In addition to the interest rate discussion, the Fed raised its headline inflation expectation to 3.4%, a full percentage point increase from the March projection. The raised expectations arrive amid the largest gain in consumer prices in over a decade.

“This is not what the market expected,” said James McCann, deputy chief economist at Aberdeen Standard Investments. “The Fed is now signaling that rates will need to rise sooner and faster, with their forecast suggesting two hikes in 2023. This change in stance jars a little with the Fed’s recent claims that the recent spike in inflation is temporary.”

“If you’re going to get two rate hikes in 2023, you have to start tapering fairly soon to reach that goal,” said Kathy Jones, head of fixed income at Charles Schwab. “It takes maybe 10 months to a year to taper at a moderate pace. Then you’re looking at we need to start tapering maybe later this year, and if the economy continues to run a little bit hot, rate hikes sooner rather than later.”

Other financial pundits saw the comments by Powell as more predictable, although still sufficient to startle investors.

Willem Sels, the chief investment officer for private banking and wealth management at HSBC, said the statement and projections were not a major surprise, but did represent a shift in tone.

“This is not a huge surprise, though a bit more hawkish than many economists expected, with the median dot showing two rate hikes by 2023. Prior to the meeting, markets already priced in a good chance for a rate hike in 2022, and several hikes in 2023,” Sels said. “As the market had already started to anticipate a change in the Fed’s future direction of interest rates, this should limit the impact of today’s news, though the immediate market reaction is a mild rise in Treasury yields and somewhat lower equity markets because of that more hawkish tone.”

There are also still other factors that affect the timeline for the rate changes however, as initial jobless claims unexpectedly climbed last week despite an ongoing recovery in the U.S. employment market, the Labor Department reported Thursday.

Federal Reserve Chairman Jerome Powell noted the difficulties in getting workers back to filling the record 9.3 million available jobs.

“Factors related to the pandemic, such as caregiving needs, ongoing fears of the virus, and unemployment insurance payments appear to be weighing on employment growth,” Powell said Wednesday at a news conference following this week’s central bank meeting. “These factors should wane in coming months against a backdrop of rising vaccinations leading to more rapid gains in employment.”

Meanwhile, investors who see Treasury yields falling and bonds climbing again could look to invest in the ProShares Ultra 20+ Year Treasury (UBT), which is up over 4% on Thursday.