You are at:Home»Featured»Treasury ETFs Relatively Steady As Fed Code Of Conduct Comes Under Fire 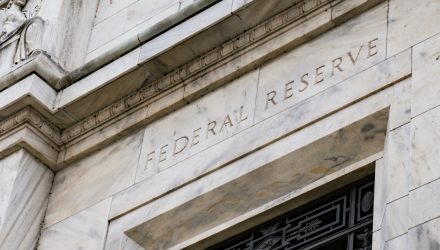 The Fed is under fire this week, following news that a number of Federal Reserve officials, including Chairman Jerome Powell, owned and traded individual securities, while the Federal Reserve itself was purchasing and holding the same type of assets. Meanwhile, Treasury ETFs seem only mildly disturbed.

While it is unclear whether any such holdings or transactions have violated the Fed’s code of conduct, they have generated concerns about the Fed’s conflict of interest policies and the oversight of Federal Reserve officials.

The holdings varied from hundreds of thousands to millions of dollars’ worth of bonds.

Powell, for instance, held over $1.25 million of municipal bonds in family trusts, over which he claimed to have no regulation, and were supposedly only a minimal portion of his total reported assets. In addition, the bonds were purchased before 2019, yet they were held while the Fed bought $21.3 billion in municipal bonds last year.

Meanwhile, Boston Fed President Eric Rosengren held between $151,000 and $800,000 worth of REITs that owned mortgage-backed securities. He had up to 37 separate trades in the four REITs while the Fed bought nearly $700 billion in MBS.

Finally, Richmond Fed President Thomas Barkin held $1.35 million to $3 million in individual corporate bonds that were bought before 2020. The bond holdings include securities related to Pepsi, Home Depot, and Eli Lilly. In 2020, the central bank created a corporate bond-buying facility and purchased $46.5 billion of corporate bonds.

Due to concerns related to potential violations of the Fed’s code of conduct, Chair Powell is asking for an examination of the members’ bond purchases and holdings.

“Because the trust of the American people is essential for the Federal Reserve to effectively carry out our important mission, Chair Powell late last week directed board staff to take a fresh and comprehensive look at the ethics rules around permissible financial holdings and activities by senior Fed officials,” a Fed representative said in a statement.

“This review will assist in identifying ways to further tighten those rules and standards,” the representative added. “The board will make changes, as appropriate, and any changes will be added to the Reserve Bank Code of Conduct.”

The statement happened roughly an hour after Senator Elizabeth Warren said that she had sent letters to the Fed’s 12 regional banks asking them to accept more stringent restrictions.

“The controversy over asset trading by high-level Fed personnel highlights why it is necessary to ban ownership and trading of individual stocks by senior officials who are supposed to serve the public interest,” Warren wrote in the letters.

The Fed’s own code of conduct states that officials “should be careful to avoid any dealings or other conduct that might convey even an appearance of conflict between their personal interests, the interests of the system, and the public interest.”

A Fed spokesperson told CNBC that Powell had no control over either the Fed’s individual municipal bond purchases or the investments made in his family’s trusts. A Fed ethics officer found that the holdings did not encroach on government rules either.

Meanwhile, Richmond Fed President Barkin declined to comment, while Rosengren has said that he would sell his individual positions and stop trading while he is president. Dallas Fed President Robert Kaplan, who actively traded millions of dollars of individual stocks, also said that he would refrain from making further trades and would sell his individual positions, claiming he did nothing to breach central bank ethics.

But Dennis Kelleher, CEO of the non-profit Better Markets, noted that if some of these Fed actions are considered acceptable by the rules, then the rules need to change.

“To think that such trading is acceptable because it is supposedly allowed by Fed’s current policies only highlights that the Fed’s policies are woefully deficient,” Kelleher said.

The central bank scrutiny arises as investors await the Federal Reserve meeting next week, with many anxiously awaiting news about tapering of asset purchases or adjustments to monetary policy, as stocks have continued to slide in September.

Following an unexpectedly weak gain of 235,000 jobs in August, officials may opt to keep their options open, ensuring that they’re ready to reduce bond purchases as soon as the Nov. 2-3 policy meeting if employment growth jumps and coronavirus risks fall, but still able to delay any “taper” if the virus hinders the recovery, as the Delta variant continues to be problematic for a number of states.

Over 60% of economists anticipate that the first adjustment in bond purchases may arrive in December, according to the latest Reuters poll, which also had experts slashing their forecasts for 2021 economic growth.

“It is hard to be enthusiastic to begin reducing purchases if the pace of (job) gains has slowed a lot,” said William English, a Yale School of Management professor and former Fed official who helped shape the bond-buying program initiated by the central bank in response to the 2007-2009 financial crisis and recession.

“They will want more data,” English said. “And if it is disappointing, they conceivably end up waiting … It is a tricky statement. They want to open the door but not commit. That is the mission.”

Other experts agreed on the lack of guidance and potentially murky outlook.

“The reality is that there is no guidance other than the obvious: poor economic indicators mean the recovery from the pandemic has slowed down more than expected by Delta,” said Juan Perez, FX strategist and trader at Tempus Inc in Washington.

“The buck in the midst of all this will still have room for gains and spikes as doom and gloom play a role in diminished risk-appetite, but idiosyncratic improvements in the UK as we saw with CPI, and other regions could eventually start weakening the dollar more consistently.”

While stocks have fallen throughout September, with ETFs like the SPDR Dow Jones Industrial Average ETF (DIA), the SPDR S&P 500 ETF Trust (SPY), and the Invesco QQQ Trust (QQQ) losing ground as well, bonds have attempted to hang in there. The iShares 20+ Year Treasury Bond ETF (TLT) and iShares 7-10 Year Treasury Bond ETF (IEF) are both lower on Friday, but have ground higher since March, with the IEF trading close to 10-year highs.

Meanwhile, ETF investors interested in a targeted approach to the value segment can look to the American Century STOXX U.S. Quality Value ETF (NYSEArca: VALQ), which could benefit from more a protracted Fed tapering process.