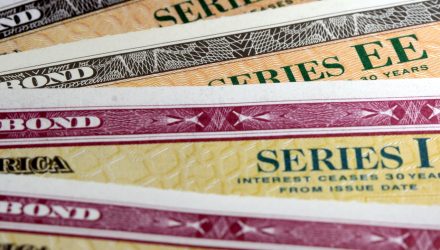 The relatively inactive bond market sold off on Wednesday, as stocks broke out of their recent consolidation over the last week to test the highs of early March, amid reopening optimism and the idea that the economy may have hit rock bottom in April.

Bond yields, which move opposite price, have been ticking up, after consolidating for some time, and on Wednesday they made a sizable move higher off their relatively low base, as prices began to fall. The benchmark 10-year Treasury yield, which influences mortgages and other loans, climbed to 0.77% from just under 0.70%, even as homebuyers are eagerly searching for purchases. The 10-year was at 0.757, its highest level since April 13. Meanwhile, the iShares 20+ Year Treasury Bond ETF (TLT) lost 1.3% Wednesday.

Much of the move is also attributed to positive payroll data Wednesday. ADP’s private-sector payrolls revealed 2.76 million jobs were cut in May, while economists had projected closer to 9 million lost jobs. While the report is not a perfect guide to the government’s monthly employment report, investors observe it for potential clues to that data.

“We thought the bond market was left for dead, but it showed some life today,” said Chris Rupkey, Chief Financial Economist at MUFG Union Bank. “It seemed to be set up by the ADP report, but the bond market has always had a good strong reaction to the ADP jobs report even if other markets don’t watch it as much.”
Other analysts also noted the disconnect between the two securities markets, noting that yields could continue to rally given positive economic data is sustainable.

“Stocks have gone crazy and bonds have not done much,” Michael Schumacher, director strategy at Wells Fargo said, adding he expects yields to rise with the 10-year reaching 1% or higher by year-end.

“You feel like the really bad data doesn’t extend into May that much or linger into June. It’s terrible but at least it’s visibly getting less bad,” he said. “There’s still  20% unemployment and the payrolls [are expected to decline by]8 million. These numbers are so bad they’re numbing … It doesn’t matter as much as long as you think the forward path is better.”

“Using an ETF to access short-term Treasuries can help investors stay fully invested.  Since the fund continuously holds bonds that mature in 3 months or less, the ETF can help you maintain exposure without having to roll individual bonds yourself,” according to BlackRock. “Rolling individual treasury bonds can be operationally intense and time-consuming. However, it is important to note that there is no guarantee of principal protection for an ETF as its price can fluctuate based on the value of its underlying securities and/or the supply and demand of the ETF shares themselves.”