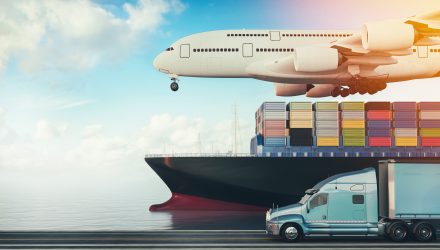 “Transportation stocks have been getting cheaper versus the S&P 500 since 2010 though earnings have increased at a faster pace,” reports Barron’s, citing strategists at Pavilion Global. “That divergence comes despite that fact that transports have outperformed the S&P 500 since the financial crisis, and also outperformed industrials since the 2016 election.”

The $813.4 million IYT holds 20 stocks and allocates over 14% of its weight to FedEx Corp. (NYSE: FDX). Air freight and logistics providers represent almost 29.6% of IYT’s weight while railroad operators are over 25% of the ETF’s roster.

“A surge in corporate capital-expenditure spending, improving business confidence and a weak dollar could boost inflationary pressures in the U.S., and transport stocks are better positioned to handle higher interest rates that stem from better economic growth,” according to Barron’s. “(Pavilion Global strategists) point to another bullish sign for the sector: Manufacturers are reporting longer delivery times from suppliers, suggesting transportation firms’ order books are full.”