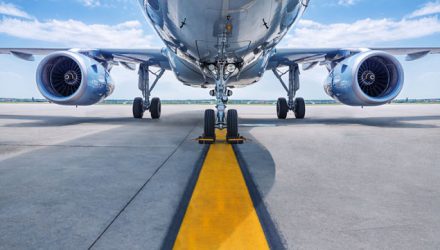 Transportation stocks were expected to benefit from lower oil prices and while that has been the case for airline stocks, other industry groups represented in IYT, including railroads, have lagged broader equity benchmarks, but that could change in the second half.

“The DJT formed its previous all-time high back in 2014-2015 in the vicinity of the 9200 level. Following a brutal decline during the 2015-2016 correction, the DJT appeared to be stuck in neutral for much of last year, even as many market segments were able to ascend to new all-time highs. Following the U.S. Presidential election last fall, the transport stocks finally got back in gear again,” according to ETF Daily News.

One of this year’s best-performing transportation ETFs is the U.S. Global Jets ETF (NYSEArca:JETS). The lone ETF dedicated to airline stocks is higher by about 17% year-to-date.