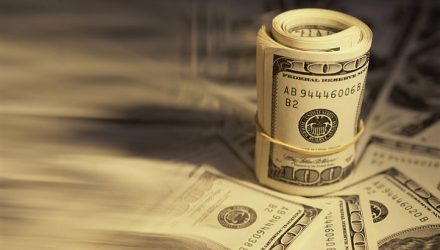 Euro strength has been problematic this year for UUP as the ETF allocates a significant portion of its weight to measuring the dollar against the common currency. For instance, the CurrencyShares Euro Currency Trust (NYSEArca: FXE), which tracks the euro’s price movements against the dollar, is one of this year’s best-performing developed market currency exchange traded funds. Interestingly, FXE is currently heavily shorted, perhaps indicating traders are betting on a euro retreat.

“US dollar weakness has contributed to the recent strength in the euro. Recent data suggests that the Eurozone economy is starting to turn the corner, while the European Central Bank has indicated that it may consider withdrawing some of its ultra-easy monetary policy at its next meeting in September,” according to Business Insider.

Heading into 2017, many bond market participants were betting the Fed would raise interest rates three times, but some market commentators believe two is the appropriate number of rate hikes this year. The Fed boosted rates in March for the first time this year and the third time in 15 months, but a dovish tone following the March meeting muted the dollar’s reaction. The dollar has struggled following the June rate hike as well.