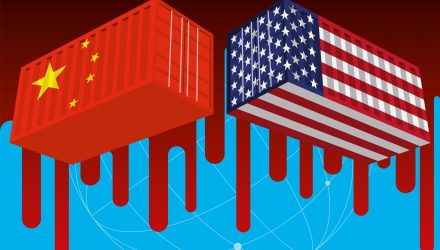 Trade tensions between the U.S. and China, the world’s two largest economies, are intensifying, but some market observers believe a full-blown trade war is likely to be averted. Avoiding a trade war would likely be beneficial to China stocks and China ETFs, including the iShares China Large-Cap ETF (NYSEArca: FXI) and the iShares MSCI China ETF (NYSEArca: MCHI).

“Trade tensions between the U.S. and China have broad economic implications that go beyond bilateral trade. Our base case is that they will not escalate into a trade war,” said BlackRock in a recent note. “We see the trade actions implemented so far as limited and unlikely to derail the benign economic and market backdrop–as long as they do not worsen into a trade war that could harm global growth prospects.”

Avoiding a Trade War With China

The U.S. is pressing China to cut restrictions on financial businesses, notably Beijing’s requirement that they operate as joint ventures under which U.S. companies are limited to 51% ownership.

“The U.S.’s new transactional trade approach runs counter to the rules-based global trade system it has long championed–and is a key risk to the global economy and markets,” according to BlackRock. “A trade war would likely have a knock-on impact on confidence and hurt emerging market (EM) exports, which stand to benefit from a business spending recovery underpinning global trade.”