You are at:Home»Equity ETFs»Japan ETFs Receive a Helping Hand from BOJ 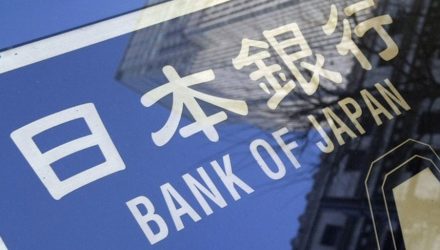 In response to the rising yen and global trade war fears, the Bank of Japan bought the largest amount of ETFs on record last month, stabilizing Japanese equity markets.

The BOJ revealed it bought 833 billion yen, or $7.82 billion, in ETFs in March, the largest monthly purchase since the central bank started purchasing ETFs in the end of 2010 as part of its quantitative and qualitative easing program to ease the economy out of deflation, Reuters reports.

The central bank has accumulated 1.9 trillion yen in ETFs over the first three months of the year, or about 30% of its annual purchase goal. The annual acquisition target is 6 trillion yen.

Related: One of the Least Expensive Japan ETFs: JPN

The recent buying spree may be a way for the BOJ to stabilize and support its local markets, especially as the yen currency strengthened on the sudden bout of global market volatility and escalating trade war speculation that pushed investors toward safe-haven bets – the Japanese yen has traditionally acted as a safe play in global markets.

“In terms of high stock prices and high valuations, risk premium is low now compared to the beginning of ‘Abenomics’ so we can assume that the BOJ is ready for tapering. But the central bank seems to have a different idea,” Yoshinori Shigemi, global market strategist at JPMorgan Asset Management, told Reuters. “The market will likely continue seeing high volatility for the time being, so the BOJ is likely to keep up with the current purchase pace for a while.”