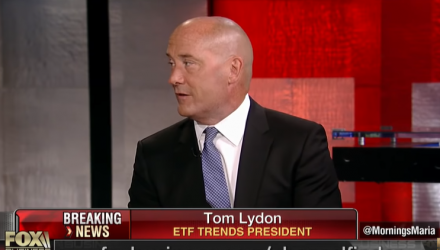 “One big thing we have to think about is small-cap stocks have had a great move, performing twice as well as large-cap stocks so far this year,” Lydon said. “When you’re looking at your portfolio, make sure you’re not just looking at the mega caps because they are more affected by what’s going on internationally right now.”

A key factor for the success of small-cap equities has been the lower corporate tax rates–a slight boon for large-caps, but a windfall for small-cap companies that see less of their income swallowed up by corporate taxes.

“The tax effect on small caps that make up more than 55% of the GDP,” said Lydon. “This is something to think about and I don’t think we’re spending enough time on that.”

BlackRock Inc, one of the authorities with respect to offering ETF products, reported their second quarter earnings–$6.62 per share, beating analyst estimates of $6.55. However, their iShares ETFs took in $17.8 billion in the second quarter–almost a 50% drop from the previous quarter.

In order to prop up their ETF product offerings, BlackRock cut fees in an effort to retain or capture new market share for ETFs, particularly in the increasing international market should the number of ETF flows from abroad continue to outpace domestic flows. This move by BlackRock could be a growing trend in the ETF space in the forthcoming months.

“BlackRock is the King Kong of the ETF marketplace with their iShares over a trillion dollars in ETFs,” said Lydon. “What they’re doing is they’re pressuring others by lowering their rates, lowering their expense ratios and continuing to gather more assets.”