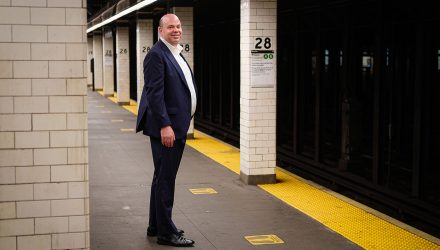 VettiFi head of research Todd Rosenbluth appeared on Bloomberg’s Trillions podcast to discuss the ETF graveyard along with Athanasios Psarofagis and Katie Greifeld.

About 100 ETFs have played the proverbial chess match with Death and found themselves wanting. The ETF launch to ETF demises ratio this year was about 4:1, down from last year’s 7:1, but still well above the historic average of 2.5:1. Psarofagis feels that the excess of launches was due to the recent market bull run, but predicts a little bit of doom and gloom in the coming days.

ETF liquidations can be scary, but when asked about what the liquidation process looks like after “tough conversations” with clients, Rosenbluth did some level setting, noting that “ETFs are closing because of lack of demand. So while I hear what Athanasios is saying, and it’s a tough conversation, there aren’t many of these tough conversations that are happening. If there were enough clients, then the ETF would survive even if it was performing badly.”

Rosenbluth walked through the process of ETFs settling obligations, selling off their holdings, and returning the money to shareholders, indicating that active managers often are pairing down the holdings of a fund approaching its liquidation. “If you’ve heard that your fund is closing, the best thing you can do is sell on your own terms,” Rosenbluth said.

Whistling Past the ETF Graveyard

Running the numbers on the recently deceased of the ETF world, the average expense ratio was on a bit of the expensive side (.60) while the age seemed young, with an average lifespan of about three years. Very few were over 5 years old.

The crew did a graveyard tour to look at some of the ETFs that have joined the index in the sky. Greifeld started with the Simplify Volt Pop Culture Disruption ETF (VPOP) which held Spotify, social media names, and Tesla among its holdings. Coming into life at the end of 2020, VPOP died the way it lived – without a whole bunch of assets (It was under $1 million when it closed).

Rosenbluth delivered some flowers to the tombstone of JP Morgan US Dividend ETF (JDIV). “This has been a record year for inflows for ETFs tied to dividend strategies,” Rosenbluth said, “we’re hearing from advisors at VettaFi that they are seeking out income alternatives, given the rising interest rate environment.” JDIV closed with about $60 million in assets, but Rosenbluth noted that the JPMorgan Equity Premium Income ETF (JEPI) has pulled in over nine and a half billion. A smaller issuer probably holds out with $60 million, but JP Morgan has other options.

Psarofagis wandered over to the final resting place of the ProShares Managed Futures ETF (FUT). This passing is especially tragic, given that FUT closed right before managed futures began having their moment. One of the older ETFs in the graveyard, FUT opened in 2016 and closed in May. Managed futures had a summer to remember, so FUT missed its moment by just a few months.

Balchunas chose the Trend Aggregation ESG ETF (TEGS) to visit. He pointed to the high fee (1.5%) as the likely cause of death but also thought the focus on ESG contributed, given how crowded that space is. He believes this fund is part of a wave of ESG closures to come, a harbinger of plague. Balchunas took a moment to crow about his ongoing bet with Rosenbluth, who will owe him a steak dinner if 19 ESG ETFs close this year. TEGS has six ESG companions with it, but Balchunas feels the end-of-year cleanup might put him closer to that steak.

“The way we do the bet is, it has to close by the end of the year,” Rosenbluth noted, saying that it will typically take 4-6 weeks to close down an ETF.

Taking a second turn around the graveyard, Greifeld took a moment to pay her respects to JDIV. Vanguard’s Dividend Appreciation ETF (VIG) was just half its price. Given that JDIV already had its visitation, Greifeld wandered over to a grave still being dug, namely the Vanguard US Liquidity Factor ETF (VFLQ) whose closing was announced in late September. It was Vanguard’s first-ever U.S. ETF to be liquidated. Opening in 2018, VFLQ never really picked up. Rosenbluth noted that some of its siblings born around the same time, such as the Vanguard US Value ETF (VFVA), have caught on.

The iShares Currency Hedge JPX EK400 (HJPX) was Todd’s second visit. Like showing up to a stranger’s funeral, Rosenbluth didn’t even know this ETF existed, but he pointed out that iShares is far from retreating in the Japan currency hedged market, with their popular iShares Currency Hedged MSCI Japan ETF (HEWJ) still putting up healthy numbers (Over $330 million in assets.) “The graveyard is littered with currency-hedged ETFs that closed too quickly,” he noted.

Psarofagis chose TRIP for his second remembrance. A thematic ETF based on travel, hotel, and airlines. Despite seeming to have good timing and low costs, it just never took off, lasting about a year. Greifeld wondered if the ETF would have had more success as a psychedelic trip instead of a literal travel trip.

The Life Goal Vacation Investment (SUNY) and the Life Goal Children Investment ETF (CHLD) were a pair of ETFs, just five months old, that flopped. “It was an interesting experiment to try and rethink how an ETF can be marketed,” Balchunas said.

Weber’s pick lived a long (though challenging) life. ProShares Short Oil and Gas is probably the oldest ETF on the list, going back to 2008. DDJ was down 57% overall. A good trade for a while, but largely ignored as oil’s ongoing investment success made a leveraged oil fund rarely the belle of the ball.

With one final journey, Greifeld chose two SPAC ETFs, the Defiance Next Gen SPAC Derived ETF and the Morgan Creek EXO SPAC Originated ETF. “SPACs were hot. Then they were extremely not hot,” Greifeld quipped. Balchunas thinks SPAC-specific ETFs may not have a bright future but will be part of a general IPO universe.

After confessing his dislike of the cherry Starburst as a Halloween treat, Rosenbluth took a moment to pour one out for the Direxion Low Price Stock ETF (LOPX). Owning companies priced between $2 and $5, Rosenbluth had some fondness for this ETF (as well as the underrated 80s film Better Off Dead.)

Psarofagis chose the ARK Transparency ETF (CTRU), noting that even the legendary Cathie Woods needs to bury ETFs from time to time. One of the seven ESG funds threatening Rosenbluth’s steak dinner and propping up Balchunas’s, CTRU didn’t last long in this world.

Despite not helping his steak bet, Balchunas took a moment to remember the Nationwide Risk-based US Equity ETF (RBUS). Despite Nationwide’s $130 billion in assets, RBUS never got much of Nationwide’s money. Balchunas was puzzled as to why they didn’t back their ETF with their own money.

Given the dour feeling in the room, Weber spiced things up with the Fallen Knives ETF (NIFE) as his corpse of choice. NIFE chose bear traps as its exposure target, trying to catch things that might bounce. Instead, it caught its demise. “Not many people got hurt in this one,” Rosenbluth said. AGFIQ Hedged Dividend Income ETF (DIVA) earned a group visit for its fun ticker.

Ghosting is a term people use to refer to a date who stops responding to messages and just disappears without a trace. Ghosts, of course, are more correctly known because they never go away – they haunt you forever. It’ll be interesting to see if the ideas in these deceased ETFs fade away or find avenues to continue to haunt – perhaps even resurrecting.