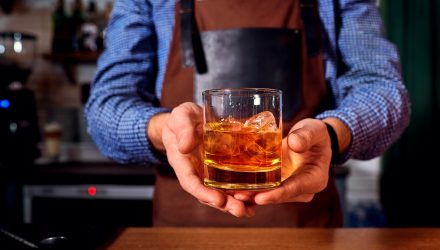 The Spirited Funds/ETFMG Whiskey and Spirits ETF (NYSEARCA: WSKY) recently celebrated its first anniversary and that milestone is worth raising a glass a too, particularly with the fund up 30.6% year-to-date.

WSKY tries to reflect the performance of the Spirited Funds/ETFMG Whiskey & Spirits Index, which is comprised of companies that are whiskey and/or spirit distilleries, breweries, and vintners and related luxury goods companies engaged in the sale of whiskey or the production and sale of mixers for use with premium spirits.

“The $6.2 million fund has returned 28.4% through October. Sam Masucci, founder and chief executive officer of ETF Managers Group, which operates the ETF on behalf of Spirited Funds, the creator of the index, says the underlying companies in the fund have risen partly because of the strengthening global economy,” reports Gerrard Cowan for the Wall Street Journal.

The U.S. is a major exporter of American whiskey with the spirit being popular in major ex-US markets, such as Australia, Germany and the U.K. Popular brands both here and abroad include Jack Daniels, Jim Beam, Crown Royal and Jameson.

WSKY’s index “includes core companies that are principally engaged in the production, distillation, storage, or aging of whiskey and non-core companies that derive a portion of their revenue from whiskey and spirits,” according to Spirited Funds. “The Index is designed to include the most liquid and investable universe of companies listed on the exchanges of developed and emerging markets.”