You are at:Home»Thematic Investing Channel»Worst May Be Over Airline ETF and It’s Oversold 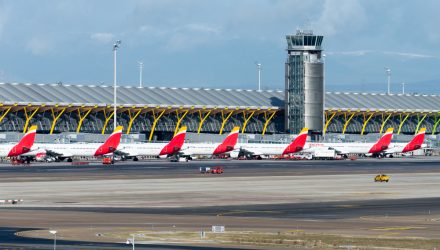 Worst May Be Over Airline ETF and It’s Oversold

The US Global Jets ETF (NYSEArca: JETS) is a prime example of an ETF at the epicenter of the coronavirus crisis and while the road to recovery for the airline industry will be lengthy, it’s worth noting airlines have histories of emerging from crises and that the industry’s names are currently oversold in a big way.

“Due to global travel restrictions in the days since the World Health Organization (WHO) declared the outbreak a pandemic, airlines have been seeing more cancellations than bookings, forcing them to slash capacity and send staff home,” said U.S. Global Investors in a recent research piece. “The decline in demand as a result of the spread of COVID-19 could end up being double the decline from the severe acute respiratory syndrome (SARS) epidemic in 2002 and 2003, according to travel research firm Tourism Economics. This implies 16 million lost passengers, which is more than the multi-year impact following the 9/11 terrorist attacks.”

Currently, many analysts are pricing in extended road to recovery for airlines, saying it could be 2023 or 2024 before the industry looks like its 2019 self and 2022 before capacity materially rebounds. Additionally, the government’s aid package to the industry comes with restrictions.

The package comes with limitations as those receiving funds cannot lay off employees before September 30 or change collective bargaining pacts. The funding bill also includes restrictions on stock buybacks, dividends, and executive pay, and gives the government the ability to take equity, warrants, or other compensation as part of the rescue package.

Technically speaking, airlines look oversold as a result of the duress they’ve been under this year.

“On a shorter-horizon basis, now is beginning to look like an attractive time to consider buying into the industry,” according to U.S. Global. JETS’s 14-day RSI indicates “that airline stocks were recently at their most oversold since September 2001. The RSI hit 13.9 on March 3, the lowest it’s been since September 21, 2001, just days after 9/11, when the index was at 7.7.”

Additionally, history doesn’t always repeat, but it often rhymes and that’s notable when it comes to buying airline dips.

“When stocks turned negative compared to the same time a year earlier, it created an attractive buying opportunity that could have resulted in healthy returns,” according to U.S. Global. “For instance, if you bought airline stocks in March 2009, near the bottom of the financial crisis, and held until March 2010, you would have seen a profit of nearly 80 percent. Returns would have been ever better at 166 percent if you entered in September 2011 and exited in November 2013.”