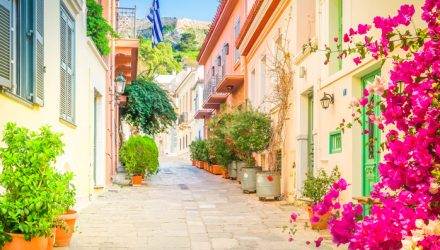 Why The Greece ETF Can Continue Pushing Higher

The Global X MSCI Greece ETF (NYSEArca: GREK) has pulled back in recent days, but the lone Greece ETF remains higher by more than 39% year-to-date, indicating the recent pullback is healthy and to be expected.

Still, GREK, which is easily one of this year’s best-performing single-country ETFs, has the potential to deliver more near-term upside. As been previously noted, an improving political environment has been a boon to GREK and Greek financial markets.

GDP Growth: Greece Has It

Amid concerns about slowing global growth, Greece is going the other direction and it’s for the better regarding its economic growth.

“The new government raised its 2020 GDP forecast to 2.8%, meaningfully higher than the 2.0% projected for 2019. The International Monetary Fund (IMF) projects a slightly lower 2.5%, while the European Commission remains tempered at 2.2%,” according to Global X. “With a growing economy and fiscal restraint, the IMF expects Greece’s debt of GDP ratio to decline over the next several years, with liquidity risks abating and cash buffers now robust. The government projects public debt to fall to 167.8% of GDP in 2020 from an expected 173.3% of GDP this year.”

Additionally, Greece is taking steps to bolster the domestic economy via increased tourism, including long awaited plans for a new casino.

“The financial sector continues to strengthen as Greece’s banks dig out from heaps of bad debt,” according to Global X. “The latest step is the Hercules Asset Protection Scheme (HAPS), which intends to reduce non-performing loans (NPLs) exposure on Greek bank balance sheets by as much as 30 billion euros, or by roughly 40%. Now European Commission-approved, the program allows Greek banks to clean up their balance sheets by transferring bad loans to special purpose vehicles (SPVs) that issue senior, mezzanine and junior bonds.”