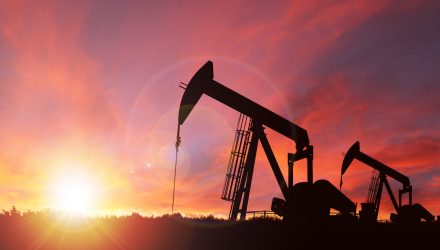 Oil is one of this year’s best-performing commodities, a point confirmed by some of the marquee futures-based exchange traded products with oil exposure. Entering Thursday, the United States Oil Fund (NYSEArca: USO), which tracks West Texas Intermediate crude oil futures, and the United States Brent Oil Fund (NYSEArca: BNO), which tracks Brent crude oil futures, were up 28.80% and 34.50%, respectively, year-to-date.

Compare those performances to the Energy Select Sector SPDR (NYSEArca: XLE). XLE, the largest equity-based energy exchange traded fund, is up 15.80% this year.

“The energy sector’s share of the overall market is smaller than it has been historically, but its valuation isn’t cheap, due to recent downward revisions in earnings estimates,” reports Evie Liu for Barron’s. “Nicholas Colas of Datatrek suggests in a Wednesday report that energy investors should look beyond price and valuation for other narratives to decide on a strategy for the sector.”

What Happened to Oil?

“Bigger large-cap tech companies can’t be solely blamed, either, since the energy sector’s share in mid-cap and small-cap indexes has been shrinking, as well,” reports Barron’s. “Energy only represents 3.9% of the S&P 400 Mid Cap Index, 4.5% of the S&P Small Cap 600 Index, and 3.8% of the Russell 2000, according to Colas.”

Still, the energy sector is beating the S&P 500 this year even as analysts ratchet down earnings and revenue estimates for the group.

“The outperformance comes even as Wall Street analysts have slashed revenue and earnings estimates for the sector,” according to Barron’s. “Analysts now expect the group to post the worst revenue growth in 2019 of any S&P 500 sector, wrote Colas, revising their outlook to a 4.7% decline from growth of 4.3% at the start of the year. For earnings, analysts now expect the sector to see a decline of 11.9% from last year, adjusted from 8.6% growth in early January.”