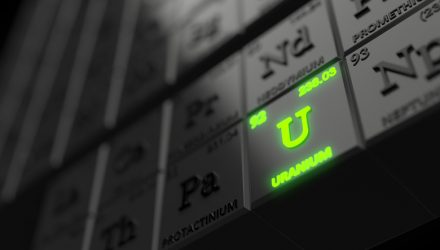 The Global X Uranium ETF (NYSEArca: URA), which tracks global uranium miners, has had its share of struggles and while the uranium exchange traded fund traded lower on Monday, there could be some glimmers of fundamental help emerging for the fund and its components.

The White House said it will not employ export quotas on uranium, potentially providing a lift to URA and some of its holdings.

Additionally, the industry may enjoy greater Chinese demand in the years ahead. The China National Nuclear Corp is investing in overseas uranium mines to secure supply for an expected power up of China’s nuclear power generation, Reuters reported.

President Trump “created a working group to review the U.S. nuclear fuel supply chain over the next 90 days, asking to find other ways to boost the domestic uranium industry,” reports Seeking Alpha.

The White House’s plan could be supportive of uranium producers on multiple fronts.

“The action could mean uranium production in the U.S. will effectively disappear, but it also could bring utilities, which had largely stopped buying uranium because of the uncertainty about whether use of non-U.S. uranium might be curbed, back to the spot market, says Dustin Garrow, managing principal at Nuclear Fuel Associates,” notes Seeking Alpha.