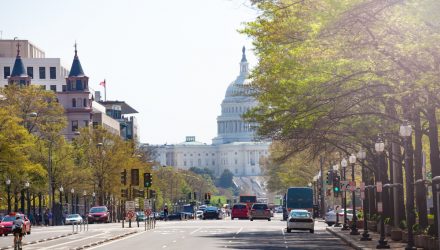 Watch This ETF as Capitol Hill Puts Infrastructure in Its Sights

When the plan was first introduced, anything remotely associated with the initiative got a major boost. Analysts were quick to parse the plan and find any opportunities, such as clean energy and electric vehicles.

“President Biden’s economic agenda is set to face a major test on Capitol Hill this week, as the Senate barrels toward an early vote on a roughly $1 trillion proposal to improve the nation’s infrastructure even though negotiators still haven’t agreed on key details,” a Washington Post article said.

“Despite months of frenetic talks, lawmakers are slated to return to the Capitol on Monday in the same political position in which they departed last week: They broadly support new spending to upgrade the nation’s roads, bridges, pipes, ports and Internet connections, yet remain plagued by schisms over how to finance the still-forming package,” the article added.

PAVE, which is up 16% for the year, seeks to provide investment results that correspond generally to the price and yield performance of the Indxx U.S. Infrastructure Development Index. The fund invests at least 80% of its total assets in the securities of the underlying index.

The underlying index is designed to measure the performance of U.S.-listed companies that provide exposure to domestic infrastructure development, including companies involved in construction and engineering; production of infrastructure raw materials, composites, and products; industrial transportation; and producers/distributors of heavy construction equipment.

One of the main topics of contention regarding the infrastructure bill was the enforcement of unpaid taxes by the Internal Revenue Service (IRS) as a revenue-raising strategy to help fund the plan. This revenue-raising measures was eventually taken off the table as a result of political pushback.

“One reason it’s not part of the proposal is that we did have pushback, said Sen. Rob Portman, R-Ohio, in a Fox Business article. “Another reason is that we found out that the Democrats were going to put a proposal into the reconciliation package which was not just similar to the one we had, but with a lot more IRS enforcement. So that created quite a problem.”