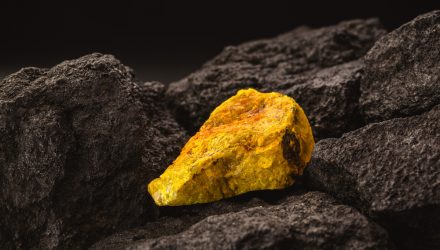 Among the best performing non-leveraged ETFs of Monday, the Global X Uranium ETF (URA) advanced 7.3%, breaking above its long-term resistance at the 200-day simple moving average.

The U.S. and other European countries are planning to extend the life of nuclear reactors after their original license expires, the Wall Street Journal reported.

Belgium has pushed off the shutdown date of two reactors until 2036 from its previous planned 2025 date to help ease Europe from its reliance on Russian natural gas. Meanwhile, Germany, which was expected to shut down all of its reactors by the end of the year, is now rethinking its choice, with the last three expected to continue operations through next year to help save on winter energy gas in face of curtailed gas supplies from Moscow.

As a result of the worsening energy crisis in face of curbed Russian supplies to Europe, more politicians are calling for a renewed look at the nuclear energy sector for an alternative source of energy.

For instance, just last week, Japanese Prime Minister Fumio Kishida called to reopen its nuclear reactors in response to the rising costs of natural gas after the island nation closed most of the reactors in the wake of the disastrous earthquake and tsunami that triggered meltdowns at the Fukushima Daiichi plant.

“In order to overcome our imminent crisis of a power supply crunch, we must take our utmost steps to mobilize all possible policies in the coming years and prepare for any emergency,” Kishida said during a “green transformation” conference last week, Fox reported.

In response to this shifting sentiment on nuclear energy in face of growing energy concerns, France has proposed 14 new large reactors in the decade ahead, and other countries, including the U.K., the Czech Republic, and Poland, among others, are following suit.

“Extending nuclear plants’ lifetimes is an indispensable part of a cost-effective path to net zero by 2050,” the IEA said in a report published this summer. “Yet decisions about how long to operate these plants threaten to erode that foundation.”