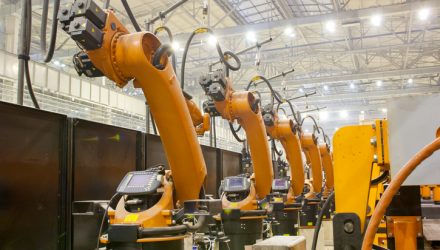 Though it’s off its highs of the year, the Global X Robotics & Artificial Intelligence Thematic ETF (NasdaqGM: BOTZ) has recently been mostly steady in the face of some weak industrial economic data reports.

BOTZ “seeks to invest in companies that potentially stand to benefit from increased adoption and utilization of robotics and artificial intelligence (AI), including those involved with industrial robotics and automation, non-industrial robots, and autonomous vehicles,” according to Global X.

Industrial robots are a marquee area of growth for the sector with recent data points confirming as much.

“The industrial robotics market grew a healthy 6% year-over-year in 2018, according to the International Federation of Robotics’ (IFR) annual report,” said Global X in a recent note. “The 422,000 industrial robots sold came despite cyclical weakness in historically important end-markets for the robotics industry, including automotive and consumer electronics.”

Currently, industrial robots represent a small slice, by some estimates just 1%, of overall industrial spending, implying a significant runway for growth in the years ahead.

“Above-average growth from the U.S., Germany, and Japan helped propel sales,” according to Global X. “New to the IFR’s report were data on collaborative robots or cobots. The14,000 units sold, or 3% of total industrial installations, suggest that this nascent vertical could grow significantly faster than the overall industry.”

Related: AI On The Rise And The Robotics ETF Still Worth a Look

Importantly, investors don’t have to pay up for the sales growth associated with BOTZ. Using sales-based metrics, investors will find that BOTZ, though it’s a growth product, is attractively valued. The fund’s price-to-sales-growth and enterprise-value-to-sales-growth ratios of 0.20x and 0.21x are below the comparable metrics on the S&P 500.