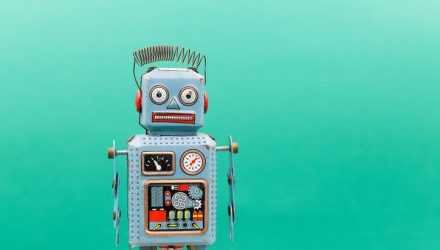 The cyclical industrial sector has had its share of struggles this year, but some robotics ETFs, which have heavy industrial exposure, are still performing well. For example, the Global X Robotics & Artificial Intelligence Thematic ETF (NasdaqGM: BOTZ) is up 12.31% year-to-date and there could be more upside coming for BOTZ and rival robotics funds.

“But one area of the industrial economy is still growing like gangbusters: robots,” reports Al Root for Barron’s. “Robotic automation is penetrating new processes in different industries, such as logistics and health care, so the outlook for robots continues to be bright, even as the economy slows.”

Bank On BOTZ For Robot Rock

Boding well for BOTZ is data suggesting that orders for industrial robots are increasing.

“Orders and values diverge because smaller robots, including collaborative robots called co-bots designed to work safely beside humans, are growing faster than the largest, most expensive robot models,” according to Barron’s.

Robotics and artificial intelligence are making machines smarter and more capable than ever before, allowing robots to take on increasingly sophisticated tasks for faster and more accurate production.

Related: Catalysts That Could Catapult the BOTZ ETF Higher

Ten industries are represented among the 37 holdings in BOTZ with technology and industrial sectors looming large.

“Robot growth is good news for the industrial industry, but the robot business is still small in the grand scheme of things. The roughly $500 million in North American orders for the second quarter of 2019, for instance, represents much less than 1% of total capital spending by global industrial firms over the same span,” according to Barron’s.