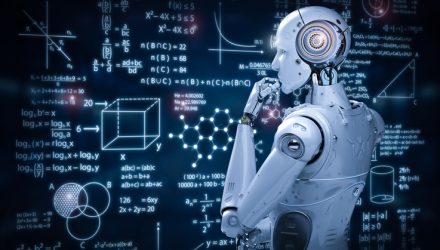 Catalysts That Could Catapult the BOTZ ETF Higher

The Global X Robotics & Artificial Intelligence Thematic ETF (NasdaqGM: BOTZ) is one of the prime examples of a successful thematic exchange traded fund. Up 26% year-to-date, BOTZ proves the artificial intelligence and robotics themes offer plenty of potential for investors.

“Between 2009 and 2017, the unit sales of industrial robots increased from 60,000 to 381,000 annually, a 26% compounded annual growth rate (CAGR),” according to Global X research. “The auto industry has been at the forefront of this adoption, contributing the largest share of demand, as efficiency and precision remain top priorities. Autos are followed closely by the consumer electronics industry, primarily using robots for smaller-scale tasks such as machining and assembly of the latest gadgets. Together, the two industries have comprised of about two-thirds of total robotics purchases.”

Ten industries are represented among the 37 holdings in BOTZ with technology and industrial sectors looming large.

Unmanned robots and drones are another hot corner of the robotics universe.

“Drones are prime examples of how technological disruption can often be traced to solving everyday problems. Areas that are difficult to access due to poor infrastructure, dangerous conditions, rough terrain, or crippling traffic are ripe for drone usage,” notes Global X.

Thematic strategies tend to be alpha-seeking, have a long time horizon and are growth oriented. The thematic investments also transcend classic sector, industry and geographic classifications as many overlap.

“The world’s leading robotics companies have become experts in developing and incorporating AI software into their specialized machines,” said Global X. “In the past, training robotics was laborious and required time, capital, and engineering expertise, but AI simulators are becoming increasingly accurate at transferring learning to real world applications.”