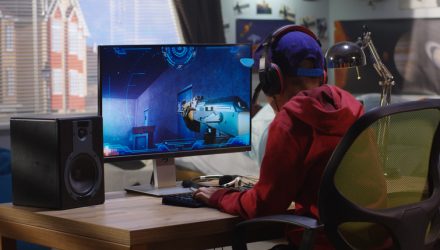 As has been widely noted, one of the primary catalysts driving the video game industry’s growth expectations for the next several years is expected, steady increases in television viewership of e-sports competitions.

Streaming viewership is becoming part of that conversation and one way of accessing that theme is with the  Roundhill BITKRAFT Esports & Digital Entertainment ETF (NERD), which covers video game developers, platforms, and event and league operators, among other corners of the online gaming space.

“Game live streaming, whereby “streamers” broadcast their gameplay live via web platforms, has taken the original form of entertainment — the games themselves — and allowed for a “second derivative” mode of consumption,” said Roundhill in a recent note. “While no one is interested in watching others stare at a movie screen or listen to an album, the digital immersiveness and interactivity of games have made this second derivative an exciting and popular form of new entertainment. Per SuperData, more people watch gaming than HBO, Netflix, ESPN, and Hulu combined [(this includes both live streaming and gaming video on demand (“VOD”)]”

While most investors probably envision a basketball, football, baseball, soccer, or more traditional sporting event when they consider televised content, the esports world has huge spectatorship. Importantly, as Roundhill notes, there are differences between esports and streaming gaming.

“At Roundhill, we consider the broader opportunity set of gaming video content as our investment thesis,” according to the issuer. “That said, many industry participants define esports exclusively as “professional gaming”. Importantly, this distinction differentiates between popular streamers like Ninja (who also happens to be a professional Fortnite player) and professional esports tournaments like ESL One. For reference, League of Legends generated 19.4 million in esports hours watched in August 2019. Meanwhile, League of Legends had 69.7 million in total hours watched.”