You are at:Home»Thematic Investing Channel»Esports Event Has Investors Seeking Out NERD ETF 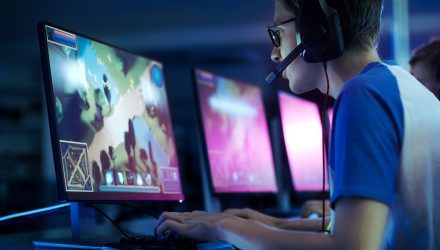 This week in Montreal marks the commencement of The Serious Play Conference, a leadership conference for both those who create serious games/simulations and those who implement game-based learning programs. Speakers are the most experienced developers and designers in the industry, the top academic researchers and senior program heads from education, corporate, healthcare, government/military, museums and other emerging areas.

With self-described computer and video game nerds scrambling to be a part of The Serious Play Conference festivities, investors are looking for ETFs that highlight the video game industry. One such ETF is the Roundhill BITKRAFT Esports & Digital Entertainment ETF (NERD), which covers video game developers, platforms, and event and league operators, among other corners of the online gaming space.

“Over the past few years, the gaming landscape has evolved,” said Roundhill CEO Will Hershey in a press release, quoting data from Newzoo. “Technological advances in streaming have transformed video games into spectator sports, with more than 450 million viewers worldwide.” He also notes that $4.5 billion was invested in esports last year.

While most investors probably envision a basketball, football, baseball, soccer, or more traditional sporting event when they consider televised content, the esports world has a huge spectatorship as Hershey points out.

“My favorite statistic is that, in 2017, more people watched gaming and esports than HBO, Netflix, Hulu and ESPN combined,” Hershey added. He says his firm defines esports as “competitive gaming in front of a viewing audience.” That definition can include watching a favorite competitor on your home computer as well as attending a championship game at a stadium.

Projected global gaming revenues are expected to climb from $138 billion in 2018 to $180 billion in 2021. Such large projections have some industry watchers wondering if the numbers are over-inflated. But according to self-professed gamer, Tim Maloney, who is co-founder and CIO at Roundhill Investments, the opportunity is real.

The Index consists of a modified equal-weighted portfolio of globally-listed companies who are actively involved in the competitive video gaming industry. This classification includes, but is not limited to video game publishers, streaming network operators, video game tournament and league operators/owners, competitive team owners, and hardware developers.

“The reason for having an index in an ETF of the different publishers is because it’s a hit-driven business,” Maloney said. “Fortnite came out of nowhere a few years ago; now it’s the biggest thing anyone has heard of. You want diversified exposure, and having the ETF approach for it helps mitigate some of those risks in the hit-driven business.”