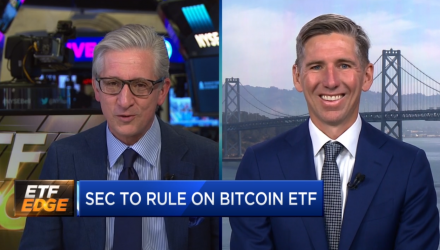 There’s another deadline fast approaching for one of the most anticipated bitcoin ETF applications. As Bob Pisani explained on CNBC’s ETF Edge, while the SEC has turned down one application after another, they are expected to issue a ruling by next Monday, October 14, on one of the last Bitcoin ETFs that’s still outstanding.

As this latest Bitcoin ETF proposal came from Bitwise Asset Management, it was fitting for ETF Edge to invite Bitwise’s Matt Hougan onto a panel discussion during Monday’s episode. Hougan said a lot has changed in the Bitcoin market over the past two years.

“Two years ago, there were no regulated insured custodians in the Bitcoin market,” Hougan notes. “Today, there are almost ten. They’re big names like Fidelity and Coinbase. They have hundreds of millions of dollars of insurance from firms like Lloyds of London. Two years ago, there were no regulated crypto exchanges. Now six of the ten big crypto exchanges are regulated by the New York Department of State with market surveillance technologies in place.”

“Most importantly,” Hougan adds, “Two years ago, it was a one-sided inefficient market. Today, we have $200+ million in volume and regulated futures every day. Jane St. in Susquehanna and other big market makers are in the market. The market is trading at penny-wide spreads. It’s among the most efficient institutional markets in the world.”

This has come as a result of not just what Bitwise did, but the evolution of this particular market over time, which seems like going from night to day, by comparison. For those reasons, things could be closer than ever to get a Bitcoin ETF approved.

Where Have The Bitcoin ETF Concerns Been?

Pisani brings up the problems the SEC previously had with this type of ETF. One was the concern for their being unregulated, overseas exchanges where there was no control. The other issue revolves around the way custody is set up.

In an attempt to get into how this latest Bitcoin ETF can address those problems, Hougan explained that custody is a solved problem at this point with cryptocurrency. Given the regulated, insured custodians now in place, that issue has pretty much gone away over time.

When it comes to market surveillance and quality, the most focus will be here, but Bitwise has approached it in two ways. They did a lot of research on what the real nature of the Bitcoin market is.

“People’s views of the Bitcoin market are often anchored a few years ago when it was a wild wild west. So, we submitted hundreds of pages of research showing that the market is truly efficient,” Hougan explained. However, the key was, “The growth of that regulated CME Bitcoin futures market.”

It’s now trading $200 million a day, and about 20-30% the size of the total Bitcoin spot, which matters because one of the things the SEC has said was in regards to a possibly large, significant, regulated derivatives market trading side by side with the Bitcoin spot market, which can solve the issue of market surveillance.

Will the SEC See the Light?

Now it comes down to whether or not the SEC is big enough to reconcile their fears of the unregulated nature of some portion of the Bitcoin spot market.

ETF Trends CEO Tom Lydon said Bitcoin isn’t going anywhere. He said there is a significant desire among financial advisors to solve this request from their clients to participate in crypto, as opposed to them going rogue and doing something themselves.

Lydon then asked what a Bitcoin ETF from Bitwise would bring as far as stability for their average client. Hougan said the opportunity in this area is one of the most exciting wealth generation opportunities in the world. The proof is in seeing how Bitcoin is the single best performing asset in over the last five years.

Hougan goes on to delve into the problem, which involves big institutions having safe and secure ways to buy Bitcoin today in private funds only available to the ultra-high net worth investors, while regular investors don’t have a safe way. He adds how the Bitcoin ETF would allow everyday investors to have safe, simple, secure access to the wealth generation taking place in Bitcoin and crypto. Financial advisors would be able to give it to their clients easily rather than going rogue.

During the segment, Pisani then moved to GTS Principal Reggie Browne to discuss the “Grandma Problem,” as in, “Is it safe to sell it to Grandma.” Browne believes it comes down to the views of the regulators. They have a concern with investor protections with the right mix of transparency, and a responsibility to an investor approval will come. There still is a road to travel, but things are getting closer.

“We look at inverse and leveraging all the time,” Lydon added. “We’ve come a long way, and I think from an educational standpoint, if they approve something like this, a 2% allocation in a long-term portfolio isn’t going to hurt you.”

And lastly, as Hougan explains, the SEC has to make a decision this coming Monday, October 14, as they have no more ways to postpone it.

Watch Tom Lydon And The Panel Go Over the Possible Bitcoin ETF on CNBC: