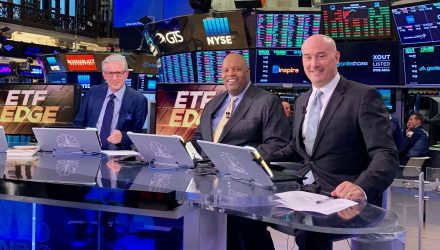 ETF Trends CEO Tom Lydon spoke about the recent Charles Schwab (SCHW) announcement to reduce commissions to $0 on CNBC’s ETF Edge with Bob Pisani on Monday, alongside GTS Principal Reginald Browne and Bitwise Investments’ Matt Hougan. As was reported last week, Schwab officially eliminated commissions for trading stocks, ETFs and options today on its mobile and web platforms for securities listed on US and Canadian exchanges.

As described by Charles Schwab, who appeared earlier on CNBC, the choice was made due to a need to be competitive in this environment. Probing further on the “race to zero” debate, Browne began in answering a question regarding firms having a desire to hold onto a certain scale when it comes to clients and assets.

Pisani declares this move by Schwab to be a “real shot across the bow” at competitors, as Ameritrade, E*Trade (among others) all following suit on the news. Jumping over to Lydon, Pisani asked about a possible lead into more industry consolidation and what could be started from here.

“They’ve got a pretty big checkbook,” Lydon states, “And when you think about companies like Betterment or Wealthfront, some of those Robo advisors, they may be free for the taking. Also, companies like Robinhood and Acorn that have done a good job for this next generation of investors that run their portfolios on their phone; now Schwab is clearly in that game.”

In speaking to where this can end, Browne believes it is more about client engagement than anything. There are other businesses inside of Schwab, such as banking and advice, which is true of all participants. Still, while those areas are a means of capturing revenue, a decision like Schwab’s is all about growing a client’s spirit internally. To keep that going, it’s a matter of understanding how to pivot hard.

Since clients tend to stick with the firms they have chosen, it takes a lot to get them to live. As Lydon notes, half of the income for these firms comes from the financial advisor community.

“When you look at that and the loyalty of financial advisors that they’ve been serving for many many years, they all benefit from that. Obviously, their clients benefit from that as well. And I think other areas, as far as better execution on ETF trades down the road, we’ll see that,” Lydon added.

Browne agrees, noting how the client experience is at an all-time high. This is a result of getting a midpoint pricing for US equities, across the board ETS, as well as NMS Securities. Because of that, it has allowed the zero-commission fee to occur in a market place.

Speaking to how this affects markets across the ETF space, Pisani asks when consolidation in this area will occur. Lydon explains how the new ETF rule will make it easier for more ETFs to come to market. That said, they do not all have the best products to bring or the presence to get distribution behind it, necessarily.

“We’re gonna continue to see more and more ETFs close as time goes one, and we’ll see some rock stars develop in the years to come as well,” Lydon added.

Additionally, since the top ten fund families control 95% of the business, Lydon also adds how that will continue unless there are changes in the marketplace. With a ten-year bull market, there could be some alternative strategies out there that may play well in the next five years, and everyone should look for assets to flow in those areas.

Watch Lydon Take Part of This Schwab Discussion on CNBC: