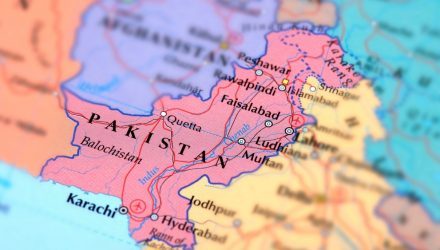 The Pakistani rupee currency depreciated as much as 2.8% to 221.875 per dollar, its biggest one-day drop since March 2020, while Pakistan’s benchmark stock index decreased 1.5%, Bloomberg reported.

Pakistan’s markets weakened after Fitch downgraded its outlook to negative Tuesday, highlighting concern over a “significant deterioration in Pakistan’s external liquidity position and financing conditions” and risks to the implementation of its International Monetary Fund program.

“The worries are piling on to political uncertainty, with dollar payment pressure and the Fitch outlook downgrade,” Samiullah Tariq, head of research at Pakistan Kuwait Investment Co., told Bloomberg.

The rupee has been under pressure and declined to all-time lows in recent sessions due to heightened political uncertainty that further muddied the outlook for the country’s bailout plans with the IMF to avoid a potential default.

The government of Prime Minister Shehbaz Sharif who took over from ousted premier Imran Khan in April has had a difficult time resuming the IMF bailout plans.

Pakistan has been tackling a worsening economic outlook, with quickly depleting foreign reserves, a depreciating local currency, and a widening fiscal and current account deficits.

“If Pakistan is able to maintain fiscal and monetary discipline, the health of the economy would improve and an outlook upgrade would follow,” Fahad Rauf, head of research at Ismail Iqbal Securities, told Reuters.

Pakistan’s central bank has already hiked policy interest rates to 15% in a bid to contain rising inflationary pressures. The central bank projected gross domestic product growth in the 2022-23 financial year to fall between 3% and 4%, compared to the government’s budget estimate of 5%.