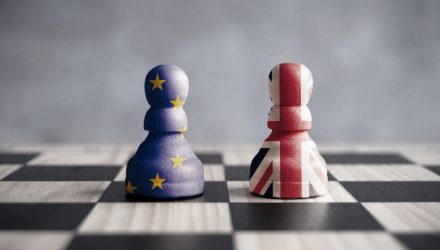 While the rest of the market was distracted, United Kingdom country-related exchange traded funds continued to slip on fears that Prime Minister Boris Johnson’s tough stance on talks with the European Union could lead to a hard Brexit.

“Sterling appears to be coming off on the not-very-encouraging signs from the two sides at the start of the negotiations. They are positioning themselves at two extremes,” Adam Cole, chief currency strategist at RBC Capital Markets, told Reuters.

Weighing on U.K. markets, traders were worried that Britain could hit the end of a 11-month transition period without a trade deal with the European Union in place.

“It is clear that for thousands of business across the UK and Europe, there is a lot riding on the outcome of the UK/EU future arrangement talks. Until more clarity emerges we expect sterling to be vulnerable,” Rabobank’s senior currency strategist Jane Foley told Reuters.

Johnson has exhibited an obstinate stance, promising that Britain will not follow the bloc’s rules and regulations. Meanwhile, the EU warned Britain that access to its market of 450 million people will depend on how London adheres to rules on environmental and labor regulations.

The U.K. holds that there will be no need to follow the E.U.’s rules, and there is no need to bind U.K. to an agreement, The Guardian reports.

“This will probably characterise negotiations over the next 9-10 months and stands to drag cable back to the lower end of its $1.29-$1.35 range,” ING analysts told clients, referring to the pound currency.

Many market observers are closely watching trade deal progress between the U.K. and E.U. as a no deal scenario could subject British companies to new trade barriers and impeded supply chains, making it more costly to due businesses across the Channel.