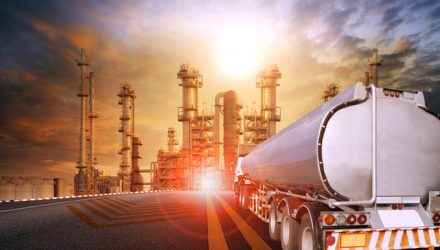 Master limited partnerships (MLPs) and the corresponding exchange traded funds (ETFs) are among this year’s best-performing plays in the energy sector. For example, the Global X MLP ETF (NYSEArca: MLPA) and the Global X MLP & Energy Infrastructure ETF (NYSEARCA: MLPX) are soaring and midstream exposure is a big reason why.

MLPs and the related ETF are also ideal ways for investors to skirt volatility stemming from trade wars because MLPs derive the bulk of their revenue on a domestic basis.

“By contrast, MLPs and midstream energy companies largely derive their revenues from domestic sources,” according to Global X research. “While 39% of the S&P 500’s revenue comes from abroad, approximately just 15% of midstream revenues come from outside the United States. And for midstream firms with revenue exposures outside the US, they are typically limited to Canada and Mexico.”

Due the domestic tilt of midstream MLPs, including those that dwell in MLPX, these companies are also insulated from currency shocks because most of their revenue is denominated in dollars.

“In conjunction with its domestic focus, the midstream segment’s significant dollar-based currency exposure has helped further insulate it from geopolitics,” according to Global X. “While the trade wars, shifting monetary policies, and volatile commodity prices have dented international currency values, the dollar has held up well. As a result, companies with significant foreign revenue have suffered from depreciating currency values – a headwind that has not afflicted the midstream space.”

Additionally, MLPs are high-yield assets. With a dividend yield of 5.17%, MLPX confirms as much. That also means MLPX and its components can benefit from relaxed monetary policy by the Federal Reserve.

“The Fed’s December pivot to a more dovish stance has offered additional support for the midstream space, with higher yielding investments benefitting from falling bond yields,” according to Global X. “Since the end of 2018, the US 10-year Treasury rate fell by 65 basis points (bps), dropping from slightly over 270 bps to just above 200 bps now. The market is now pricing in three rate cuts by the end of 2019, and four total by the end of 2020, expressing that it believes rates will be aggressively heading downward in the near term.”