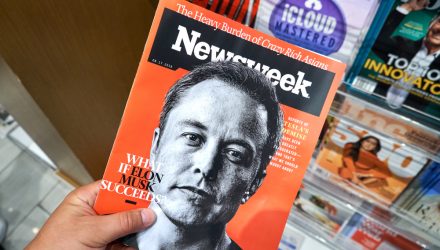 Electric automaker CEO and SpaceX founder Elon Musk certainly knows a thing or two about being a boss, but it’s the Global X Founder-Run Companies ETF (BOSS) that’s been delivering gains like one, with a year-to-date gain of over 50%.

Ironically, Tesla is one of the fund’s top holdings, as of December 24. Rounding out its top five holdings are Square Inc, Trade Desk Inc, Twilio, and Snap.

BOSS focuses on companies where the founder or co-founder serves as the CEO of the company. Who knows a company best than someone who was there from the very beginning?

BOSS seeks to provide investment results that correspond generally to the price and yield performance, before fees and expenses, of the Solactive U.S. Founder-Run Companies Index. As mentioned, the underlying index is designed to provide exposure to U.S. companies in which a founder or co-founder of the company is serving as the Chief Executive Officer of the company (collectively, “Founder-Run Companies”), as determined by Solactive AG, the provider of the underlying index.

The BOSS ETF and Entrepreneurship

The next great idea could easily end up a BOSS holding. A recent MIT article highlighted a study showing areas where entrepreneurship is thriving.

“As the study shows more broadly, ambitious startups remain a vital part of the American economy,” the article noted. “New business registrations have experienced a long-term drop in the U.S., but the number of startups capable of high-impact growth has risen. Such firms particularly flourished in the mid-1990s and mid-2010s — though even when the ranks of high-growth startups have thinned, including in 2008 and 2009, they have still been founded at higher rates than they were in the 1980s.”

“Entrepreneurship is an economic engine,” says MIT’s Scott Stern, co-author of a new paper detailing the study’s results. “Job growth is disproportionately concentrated in a relatively small number of young firms that then themselves scale up quite quickly.”