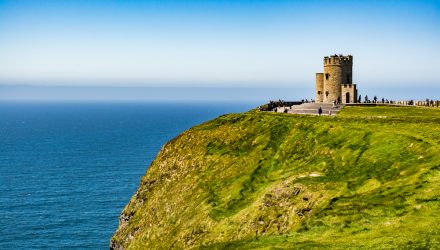 The Ireland country-specific ETF slipped Monday after a general election win for a left-wing party that called for an increased government role in the economy.

Ireland’s benchmark underperformed the rest of the European markets, with bank stocks like Bank of Ireland Group and AIB Group among the worst laggards, the Wall Street Journal reports.

EIRL includes a 4.3% tilt toward Bank of Ireland Group Plc and 3.5% in AIB Group.

The Irish equity markets suffered through a bout of political risk-off selling after the nationalist Sinn Féin party took 24.5% of the general election vote, beating out the two traditional mainstay parties in Irish politics. However, the left-wing party still failed to gain the 80 seats required for a majority.

Consequently, the end result provided little clarity on what the new government will look like. Ireland’s other major parties have previously warned they would not join a coalition with Sinn Féin, which began as the political arm of the Irish Republican Army.

Further adding to the market uncertainty, Sinn Féin campaigned on a number of key economic policies, including plans to increase charges on the banking sector, which explains why financials underperformed on Monday, along with curbs on bankers’ pay and diminishing the state’s 71% stake in AIB.

The left-wing party also stated its desire to give Irish regulators the power to cap mortgage rates, force private developers to increase social and affordable housing, and push through policies to help first time buyers in the property market. The party also wants the state to take a more active role alleviating a shortage of affordable housing.

Some observers, though, took solace in that the evenly split government will limit Sinn Féin’s policy proposals.

“Given these parties are going to have to compromise to form a government, any of the more costly policies promised during the campaign will be toned down,” Jack Allen-Reynolds, senior Europe economist at Capital Economics, told the WSJ.